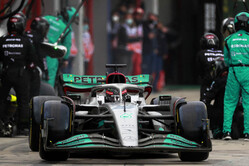 Acknowledging the W13's "incredible" pace, Helmut Marko warns the Mercedes will be a serious threat once the German team gets on top of its problems.

This weekend's race in Baku should give further insight into whether Mercedes is on top of the porpoising issue that has plagued it since pre-season testing.

Though the German team appeared to take a step back in Monaco, it is widely thought that the bouncing witnessed on the streets of the Principality was more about the track's infamous bumpy surface as opposed to the phenomenon encountered since the introduction of the new rules.

While Mercedes has shown glimpses of what might be possible, up until now it has been unable to seriously threaten Red Bull or Ferrari, but Helmet Marko fears it is only a matter of time.

"Mercedes is doing incredibly fast laps in practice and also in the races, both with Hamilton and Russell," he tells Formel1.de. "Not continuously, so for us it’s difficult to interpret where that lap time is coming from. Listening closely to the Mercedes people, I don't think they know either.

"But the dangerous thing is the potential seems to be there," he admits, "And once that can be called up over a race distance, then they'll be right up there or right at the front."

Asked if he thought Mercedes has been bluffing about the size of its problem, he replied: "No, it's not a bluff. The bluff was where they had this weird engine advantage and last year the Hamilton engine, there they were bluffing hard. So, I don't believe that.

"It's really incredibly hard to understand where this car is incredibly fast, they're the fastest in the field at one stage, but it doesn't last long.

"What exactly changes there, why they can't drive that continuously, is just, thank God, still the problem, I would say."

Believing that the W13 is off the weight limit by the same amount as the RB18, he says: "I think Ferrari is pretty much at the limit.

"The positive thing is that there is a reserve of a few tenths when we reach the minimum weight, but you can't do that overnight."