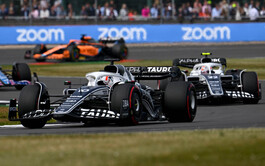 Yuki Tsunoda: "It's been a difficult day. The collision I had at the start of the race was completely unavoidable, a car came in front of me sideways and there was nothing I could do. Luckily, I only damaged my front wing and was able to get back to the pits with the red flag and continue to race with the restart. Unfortunately, I then had contact with Pierre later on. I need to review it properly but at the moment, I think I could've waited for another opportunity to pass him. My speed was good going into the corner so I thought I could make it through, I also didn't expect Pierre to close the door quite as much as he did, so this is a mistake from my side. Mainly, I just want to say sorry to the team. After that, I had damage to the car, it was very tricky to drive and that made the rest of the race very difficult for me."

Pierre Gasly: "From a difficult weekend we actually made it quite a bit better with Qualifying, then after the race restart today I was running in seventh, we were in a great position. Following the incident with Yuki I had damage to the rear wing, so we had to retire the car. Every point is valuable, especially in a season like this, so I'm disappointed with the end result today, as it was an unnecessary collision. The accident with Zhou was really scary at the start of the race, it was shocking to see him upside down but I'm glad to hear he's ok, that's the most important thing."

Jody Egginton (Technical Director): "It's very frustrating to have thrown away a likely points finish on a weekend where the team and drivers have worked so hard to extract the maximum from the package and get the cars into a position to fight for points. Contact between teammates is never good, but in this instance with both cars suffering extensive damage, one of which we had to retire, there was really no way back. As a team we will sit down and have the necessary discussions, as the move Yuki made today was not the best and needs to be avoided. In parallel, the guys will be flat out getting the cars repaired and ensuring we are as prepared as humanly possible for the next race."