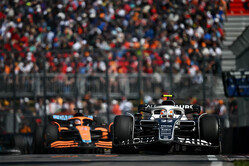 Pierre Gasly: "Starting the race out of position we thought we'd go for a different strategy, so we pitted a bit earlier, but it didn't really make much of a difference. We were struggling a lot with grip, sliding around a lot in these conditions, and we just didn't have the pace to fight in the top 10. We will have to analyse everything, but objectively we were just too slow in the race. Likewise, we didn't get lucky with the Virtual Safety Car, but at the end of the day it wouldn't have changed our end result that much. We need to use the gap now to work out what we could've done better, so we can arrive in Silverstone as best prepared as possible."

Yuki Tsunoda: "I've already been to the garage to apologise to all the team, I just pushed too much on pit exit and unfortunately I went into the wall. The pace was good today, and we'd made a strong recovery up until that point, even if it was hard to overtake, so I'm disappointed with that ending."

Jody Egginton (Technical Director): "Quite simply, it was a disappointing race for us. Starting from last on the grid due to the PU change, Yuki put in a strong stint for the first half of the race and managed his tyres well. He was able to get into a position within a shout of scoring points but unfortunately, he went off soon after exiting the pits, following his second stop, and ended his race on the spot. We opted for a very early first stop with Pierre, to try and give him some free air, this put him out of phase with some cars around him and additionally the VSC's did not fall well for him. This made his progress more challenging and, with the balance on his first set of hard tyres not being great, it was not possible to make enough progress to get into a point scoring position today. This result means we have lost some ground in the midfield battle and we need to come back strong in the next race to recover."