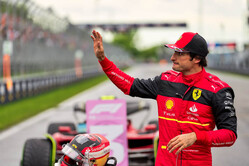 With teammate, Charles Leclerc starting from the back of the grid, Carlos Sainz believes the Canadian Grand Prix affords him his best chance of a maiden F1 victory.

Indeed, in a frantic qualifying session the Spaniard looked as though he might depose provisional pole-man Max Verstappen, until he made a mistake in the final corner of his final flying lap.

"Today I was feeling quite okay with the car, especially with the full wets," he said at session end. "But as the track was drying I felt like the others did a bit of a step and maybe I was lacking a couple of tenths.

"In the final lap I was coming purple sector one, then sector two I knew I had lost a bit too much," he admitted. "I just tried to do a very quick last corner, but it didn't pay out and it cost me half a second.

"I was just trying to go for it, for the pole, and in the end I ended up P3 for that mistake," he sighed. "It was a moment... trying to get back that last tenth or two that Max had as an advantage over us during the whole day.

"I really wanted to get it but in the end it cost me probably more than what I was going for... but it is how it is."

Nonetheless, with his teammate consigned to the back of the grid after taking on a new engine, this affords the Spaniard his best chance of a maiden win.

"We're in a good position," he said. "It's going to be a good fight with Max at the front, and let's see what we can do with Fernando because he's been very quick all weekend.

"It will be important so we can get behind Max as soon as possible," he said of the need to overcome his countryman as quickly as possible, a not entirely insignificant task. "And from there try and push Red Bull into a strategy or into something different.

"I think we have a good chance," he insisted, "we just need to make sure we get behind them as soon as possible, and if not, pass them at the start. Let's see how it goes."