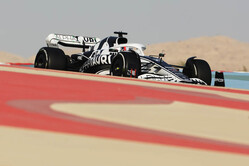 AlphaTauri's Pierre Gasly set the pace on the opening day of the Bahrain test, as Mercedes initially suggests style over substance.

While the Mercedes W13 might have grabbed today's headlines, neither Lewis Hamilton nor George Russell threatened the stopwatch, as both finished over 2s off the pace.

Though it is far too early to be making predictions, far less suggesting that Mercedes has an issue, with the first race only a week away it seems improbable - impractical even - to think that the German team is sandbagging.

Though the W13 continues to suffer porpoising issues, between them the drivers completed 122 laps, though Sergio Perez completed 138 in the RB18.

Talking of the Mexican, on a day of few dramas the Red Bull driver was responsible for one of two red flags this afternoon when he beached his car in the gravel trap after spinning at Turn 8. With just a few minutes of the session remaining it was decided not to restart.

Earlier in the afternoon the session was stopped after the aero rake on Stroll's car became loose.

While the day was incident free a number of teams have work to do overnight having not had the most auspicious starts to the test.

Fernando Alonso had limited running in the Alpine this afternoon, while Alex Albon suffered a hydraulics issue which affected his steering.

Though he set the pace, Gasly was one of several drivers seen taking a serious pounding over the course of the day as for some the porpoising phenomenon remains unresolved.

Taking over from Charles Leclerc this afternoon, Carlos Sainz missed much of the first hour of running, while Norris lost even more time with an undisclosed issue.

While Bottas, Albon and Perez gave us an early example of how successful the rules overhaul might be in terms of allowing cars to follow one another more closely, it was a brief battle between Alonso and Stroll that hopefully gave a real glimpse of things to come.

Having expressed unhappiness with the Canadian's driving, when Stroll ran wide in the final corner the Spaniard was through. The pair battled for several corners, threatening to bang wheels before the Aston Martin finally pulled ahead.

Though there was plenty of long running the race sims are expected tomorrow along with the qualifying sims.

Along with the aforementioned porpoising issues, a number of drivers appeared to have difficulty remaining on the black stuff, with Turn 10 proving a particular problem, both Mercedes experiencing several lock-ups.

Following a difficult test in Spain, today proved far more positive for Alfa Romeo, with Bottas completing 66 laps, more than he completed over the whole of the Barcelona test.

Plans for Haas to test on Sunday or even after the other teams have finished on Friday and Saturday were scuppered hen a number of teams, believed to include McLaren, Alpine and Alfa Romeo objected. The American outfit missed this morning's session after its freight - including the team's cars - was delayed.

All in all, if today was the appetiser it fell a little flat, other than the excitement surrounding the W13's sidepods. However, with the opening race just a week away, over the next two days we can expect to see the pressure ramp up.

A number of updates are expected to be introduced tomorrow, with much talk of Red Bull having a surprise up its sleeve.

"It's good to be finishing the day in P1," said pace-setter Gasly. "But we're always asked at tests how we're doing, and I think we've got to focus mainly on ourselves and our performance, not at the timing screens as, at the moment, it doesn't mean much until we get to qualifying next week. Of course, it's always nice to be top of the rankings, but at the end of the day I know we've got some stuff to work on, so we can get more out of the car.

"Overall, it's been a good day. There are lots of positives with this car but as a racing driver we always focus on the negatives, so we'll be using the next two days of testing to really get to grips with this car and work to feel more comfortable in it. I'll be working hard with the engineers tomorrow while Yuki takes over the driving of the car.

"There are new things to discover with this car every time you go out on track, so we have to make the most of every session and learn as much as we can before the first race here next week."

"We gathered a lot of very useful data in Barcelona," added Jonathan Eddolls, the team's Chief Race Engineer, "and the team has been relentlessly analysing this and producing development parts in preparation for the final test before the first race. So, we came here with a very long test list to continue to understand the characteristics of the AT03. Conditions are very different to those in Barcelona - the track was considerably hotter here, and it was generally windier, so the car was not quite as easy to drive this morning, compared to our expectations. We spent some time understanding this before getting into set-up work.

"We completed the usual aero rake running to start the day and then completed a series of further aero test items, before switching our focus to mechanical tests. We then used the softer compounds, including the C4 and C5, which are a little too soft for the aggressiveness of this track, but it is still good to give the driver experience of these before their first use on a race weekend. We closed the day with pitstop practice. We have gathered some very useful data from today's running and have a lot to analyse tonight - the results of which will define the plan for Yuki, who will run tomorrow.'

First out for Ferrari was Charles Leclerc, who completed 64 laps running the C2, C3 and C4 compound tyres. He completed the programme established for him, setting his best time of 1:34.531 on the C3 tyres.

As was the case at the Barcelona, the team had several items on the job sheet for both drivers, including car set-up, which is particularly relevant, given that the opening round of the season takes place at this track next week.

Reliability testing was also on the agenda, particularly taking into account the high temperatures here (air 37 degrees, track 47). Additionally, various solutions were tried to resolve the phenomenon of porpoising that is affecting all these new generation cars.

"Our first day of testing is behind us," said Leclerc. "The conditions we found here are very different to those in Barcelona, especially as it is much warmer here.
This morning, everything went well. We completed the number of laps we set out to and ran all the tests we had planned to, so I'm happy with how it went.
The lap times are not representative and we are just focusing on ourselves now, keeping our heads down and working well."

"Another good day of testing for us," added Sainz, "continuing where we left off in Barcelona, with similar run plans but starting to check different set-up windows.

We missed out on a final run on C3s, but in general we managed to test two or three things that were very important for us and we managed to put together a good day of running with no issues.

"The mechanics are working hard in the heat, which is never easy, so I thank them for the effort. We still have a couple of long days ahead, but hopefully they will be very productive ones."

With Daniel Ricciardo reporting unwell, Lando Norris was on duty for the entire session, the youngster completing 50 laps on his way to posting the sixth best time of the day.

"A tough day with a few problems, which set us back a lot of laps," admitted Norris, "meaning we couldn't do the long runs. We still maximised today as much as we could and as much as what the issues allowed us to do. Hopefully the next few days, we can make up for that – we just have to change the programme around a little bit in how we're trying to understand the car.

"It's tricky because it's a very different circuit: a lot bumpier; a lot hotter. Cars are getting pushed to a very different limit to the past week of testing in Barcelona. There're many things for us to understand and we'll keep learning over the next couple of days."

"It has been a busy first day," added Andrea Stella, the Woking outfit's Executive Director, Racing. "We spent most of the morning investigating brake cooling configurations, with a methodical step-by-step approach that delivered the required information, preparing us for the rest of the test and the Bahrain Grand Prix next week. In the afternoon, we spent time developing the set-up of the car. That was very useful, and we found good directions. A tough but fruitful day overall. We're all hoping Daniel is feeling better tomorrow."

Alfa Romeo had a busy and successful day, with Guanyu Zhou and Valtteri Bottas completing more than a century of laps behind the wheel of the C42. With this mileage in the bag, work will continue tomorrow with the drivers once again sharing the day, Valtteri driving in the morning before Zhou returns for the afternoon session.

"Today was definitely a step forward from Barcelona," said Zhou. "We were able to do a good number of laps, which was a way to build up familiarity with the car. Every time you step into the cockpit you get a little more confident so a day like today was really good. Of course, there's still a lot of work to do and we need to understand the car better: we will try a few things, in different conditions, in the next few sessions but we can be happy about the work we have done today."

"It was a good day in the car, getting a lot of laps under our belt and following our run plan until the red flag at the very end of the session," added Bottas. "With this mileage, I was able to first get a proper feel for the car and then focus on some set-up work, finding how the car responds, what it needs. It's nice to feel and see the progress throughout the day: the team did a good job since Barcelona, it was a good recovery after a challenging start but we are heading in the right direction."