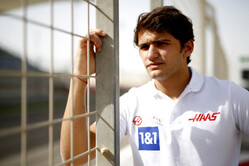 Gene Haas has confirmed that Pietro Fittipaldi will take part in this week's test in Bahrain, as the American outfit considers its long-term options.

Fittipaldi, who replaced Romain Grosjean in the two final races of the 2020 season following the Frenchman's horrific crash, is the official reserve driver at Haas ad therefore the obvious choice to replace Nikita Mazepin who was dropped at the weekend.

However, looking ahead the American team will need to consider its options especially as the loss of the substantial financial backing Mazepin brought with him will leave a question mark over the team's future.

A number of drivers are said to be under consideration for the seat alongside Mick Schumacher including former Alfa Romeo driver, Antonio Giovinazzi.

"We're in the process of looking at several candidates," Haas tells the Associated Press. "We'll see who is available and what we have to deal with, but we'll have somebody by Wednesday.

"Pietro will definitely be in it, that's what he's for, he's the test driver," he adds.

"Haas has always been the major, primary sponsor," he says of his own machine tool company, "I don't know why people said it became a Russian team. Haas Automation was always on the car.

"We're good. We're fine. We'd like more money, of course, but we're fine," he insists. "This just gives us a bigger negative number."