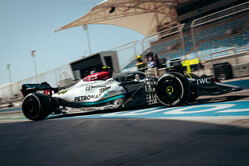 Charles Leclerc sets the pace on the opening morning of the Bahrain test, but it is the Mercedes sidepods - or lack of them - that grab the headlines.

All in all it was an uneventful morning for the nine drivers on duty, Haas having to sit out the opening session after freight issues saw the team's equipment arrive late.

Daniel Ricciardo, who was meant to be on duty, reported unwell and as a result teammate Lando Norris will have the MCL36 all to himself today.

First out was Pierre Gasly, followed by Zhou and Leclerc, however it was the Mercedes of Lewis Hamilton that caused all the excitement and not for the reasons we might have become used to.

At a time many are complaining that the new rules have left the cars looking more similar than ever, a brave gamble by the German team proves that there is always room for improvement.

As the W13 headed out it appeared to have no sidepods, but on closer inspection it becomes clear that the German team has slimmed them down to an amazing degree with the cooling inlets totally re-sculptured. There are two sets of cooling gills, one on top of the sidepod and the other on the side of the engine cover, leaving the car looking a real work of art and entirely different to its rivals.

Indeed, other than an interesting - and somewhat steep - nose on the Alfa Romeos the cars look remarkably similar to what we saw in Spain, the only real visible changes being the re-profiling of the floors.

That said, despite the alterations to the floors a number of cars are still porpoising, most notably the Alpine and the Mercedes. In an attempt to cure the phenomenon the W13, Ferrari and Alfa all ran with stiffening strakes.

Other than topping the timesheets, Leclerc is up there in terms of laps completed (64), though Sergio Perez has completed 70.

Following its nightmare in Spain, Alfa Romeo will be happy to see Guanyu Zhou complete 54 laps while Lando Norris was restricted to just 21 due to an undisclosed issue.

While Zhou stopped in the pitlane at one stage it is thought that this was due to the team running a 'fuel run out' test, the fact the Chinese driver made it back to the pitlane somewhat proving the worth of the exercise.

A number of drivers had little moments over the course of the four hour session, with Turn 10 witnessing the most. In the latter stages of the morning the wind had picked up so this might account for some of those moments.

At Aston Martin Sebastian Vettel - sporting a helmet livery in honour of Ukraine - had more than his fair share of moments though it is unclear if this was down to the German pushing the car to its limits or the AMR22 simply being a handful.

George Russell takes over the Mercedes this afternoon, while Sainz is in the Ferrari, Alonso the Alpine, Stroll the Aston Martin and Bottas the Alfa.