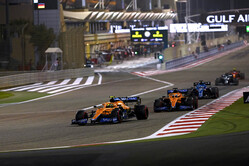 The FIA has revealed the start times of the various sessions that comprise the 2022 Formula One Season.

As previously reported all events are now three-day affairs with Thursday, which had previously been set aside for media duties, now scrapped.

Consequently, media duties, including the official FIA and team press conferences take place on Friday morning meaning a later start than usual before the cars take to the track, with FP1 set to get underway at 13:00 (local time) at most events.

Obviously, this has a knock-on effect on FP2 which will now typically get underway at 17:00.

Saturdays will also witness change, with FP3 usually starting at 13:00 and qualifying at 16:00.

Race day remains pretty much as is, though, as opposed to the 'traditional' 15:00 start the new race in Miami will see the lights go out at 15:30.

The other US event, at the Circuit of the Americas, sees qualifying move to 17:00 (local time).

As a result of the move to April, the Australian Grand Prix moves forward one hour ensuring the event finishes before sunset at 18:01.

With no agreement as yet on the Sprint format, the schedule released by the FIA makes no mention of the format.