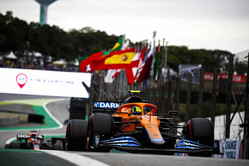 Lando Norris: "I think we have to be happy with qualifying, because we were struggling quite a bit this morning in FP1. After making some good improvements coming into quali, I felt a lot more confident with the car. We would've loved to have been ahead of the Ferraris, but we have to take P8 and P9 today because they were quicker. We're in a good position to fight them tomorrow."

Daniel Ricciardo: "It's only an eighth and ninth but from where we were this morning we can be happy with that. We didn't run the Soft earlier, but I felt like we didn't have a whole lot of pace to show either. It felt better on the Soft and to get both cars in Q3 is not a bad afternoon. I know it's towards the tail-end of the top ten, but the deficit is a lot smaller than we thought. We've still got to get them on track but we're there, we're in the fight, and we can put some pressure on them now. We'll look to move up from here but the step we made from this morning to this evening was pretty good."

Andrea Stella, Executive Director, Racing: "At the end of the first day of this sprint event in Brazil, we're relatively satisfied. We're in the game, that's the important thing. I'd like to acknowledge the good work done by the engineers here trackside, with the support of the factory, working together with the drivers, to stitch together the data from FP1 and improve the car before qualifying. Additionally, the mechanics in the garage did a good job late last night in difficult circumstances to get the cars ready to perform. We now have to carry on that work in FP2, have a good sprint qualifying and progress towards scoring good points on Sunday."