Wolff: Stewards should have investigated Ricciardo 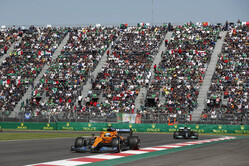 Having essentially gifted Max Verstappen and Red Bull the lead, Mercedes misery was compounded when Valtteri Bottas was hit by Daniel Ricciardo in Turn 1, spinning the W12 around and dropping the Finn to the back of the field.

While the stewards studied replays of the incident they felt it to be typical of opening lap argy-bargy and therefore warranted no further investigation.

"I think the stewards should have a look into it," he told reporters. "In hindsight, it was surprising that they didn't look at a penalty."

Ironically, both pitted as a result of the clash and then spent the afternoon running together, Bottas unable to pass the (Mercedes-powered) McLaren.

"The first lap incident was about as painful as they get," said Ricciardo, "because your race is pretty much over from the start.

"I was in a tricky position because I know that if I didn't go for it, someone else would have, and I'd probably have been swamped by other cars. At the end of the day, I think it's just a lap one incident.

"The start was good and those first few hundred metres were looking positive," he added. "I think we were potentially in P4, and in a split-second it changes.

"That's the nature of the beast, but these ones are pretty painful because you have to endure the race and hope something happens, but nothing really did.

"I was able to defend Bottas, normally when you're doing that it's for a good position, but we were both obviously at the back.

"The car was also damaged, we had a chunk of downforce missing. A bit heart-breaking. For a few seconds it looked awesome and then it looked pretty un-awesome."

"From my point of view it was a racing incident," McLaren boss, Andreas Seidl told Speedcafe.com. "Daniel managed to make the apex, and at the same time Valtteri was crossing in from the outside quite sharp with a lot of cars around.

"I don't know exactly, in tenths, how much the damage was costing," he added. "But we saw straight away at the pitstop, and then we could see that in the numbers that he was down on downforce, which I think was changing the balance a bit of the car."

Asked - not for the first time - if the failure to investigate the incident indicated a lack of consistency, especially as Pierre Gasly was penalised in Turkey for a similar clash with Fernando Alonso, race director, Michael Masi said: "No, I don't think there is a lack of consistency as you've got to look at everything on certain merits.

"You've got to look at each and every incident and see how it goes," he added. "For starters Turkey was wet, this was dry. Completely different corner configuration. There's a whole lot of things, but as I said, I haven't looked at the incident in great deal whatsoever."

Asked if the fact that Ricciardo had made the apex before hitting the Mercedes had played a part in the stewards decision, Masi said: "That could be a scenario. Having a look at the proximity of the cars of where they all are compared to each other, there's a whole lot of different factors that come into it. The stewards' view was that on this occasion it was a Turn 1 racing incident."