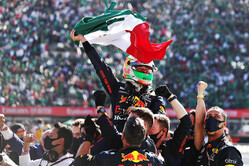 Having already made clear that he does not want to see the title decided in a gravel trap, following yesterday's qualifying session Christian Horner admitted that he didn't want a repeat of the 2019 start here either.

"You've got to be careful around here because you can't follow for too long, because the temperatures will start to get out of control," he said.

"But I think the first opportunity is down into Turn 1. You've only got to look at the replays from 2019 here to see it can get a bit juicy down there.

Though he took pole, Verstappen started the race from fourth after being handed a penalty for failing to slow after yellows were waved in the aftermath of a crash involving Bottas.

Consequently, Leclerc and Vettel had a front-row lock-out for Ferrari, with Hamilton third and Verstappen fourth.

Leclerc made a great start, as did Hamilton who began to draw alongside Vettel. However, as the German tucked in behind his Ferrari teammate for the tow, the Briton was squeezed out.

Dropping back, Hamilton found himself alongside Verstappen who had the line into Turn 1. In Turn 2 however, Hamilton had the line, they almost touched and in their efforts to avoid contact both drivers ran wide and over the grass.

Rejoining behind Albon and ahead of Sainz, still side-by-side, with Hamilton slightly ahead, Verstappen, still struggling for traction lost places to Sainz, Norris and Bottas, with the Spaniard also managing to pass the world champion in the process.

The Ferraris touched in T4 after Leclerc made a mistake, while Verstappen ran wide again in Turn 5.

A few laps later Verstappen passed Bottas, but in the process the two touched and the Dutchman picked up a puncture and had to pit. When the flag fell he was eighth.

You can see why Horner is fearful of a repeat, indeed following yesterday's qualifying session which resulted in his drivers filling the second row, the Red Bull boss is likely to have had a sleepless night.

While they say that those who do not learn from the past are doomed to repeat it, this is F1, and how many times over the years have we seen drivers repeat the same mistake over and over and over again.

Furthermore, this time Verstappen is fighting Hamilton for the title.

While it is unlikely he'll get ahead of both Mercedes at the start, he needs to pass at least one, indeed, with an eye on strategy, so does Perez.

But then, other than their own little battle, the Mercedes pair, especially Hamilton will be worrying about who is benefitting from the tow.

As if that wasn't enough, at a track which always seems to attract trouble, just behind this little quartet we have Gasly, Sainz, Ricciardo and Leclerc, while at the very back of the pack, and no doubt pushing from the outset, we have Tsunoda, Norris, Ocon and Stroll.

Doing our best to avoid clichés like 'to finish first, first you have to finish', Hamilton and Verstappen, in particular, must heed the fact that the race cannot be won at the first corner or indeed the first lap.

The Dutchman has a 12-point comfort cushion, consequently the onus is on his rival.

Other than the over enthusiasm of drivers, another factor to be considered today is reliability, with cooling always an issue here. Which means the dirty air problems faced at most tracks take on another dimension here.

We have seen countless engine changes this weekend, while others have encountered problems with their gearboxes and of course there's the mysterious rear wing issue which appeared to compromise the Bulls yesterday afternoon.

In terms of strategy, the fastest way to approach the 71-lap race is definitely a one-stopper, as there's quite a high time loss in the pit lane (around 22 seconds on top of the actual stop) and it's hard to overtake on this circuit.

Mediums followed by hard is the optimal tactic, which is why so many drivers wanted to get through Q2 on the yellow tyre. This also allows for quite a wide pit stop window.

Softs C4 followed by the hard is also feasible (although slower) but there's not so much flexibility, as the soft tyre will need to be managed over a shorter first stint compared to the medium runners.

The best two-stopper would actually be medium-hard-medium but this is slower than a one-stopper. As always, track temperature will be a key factor. With more rubber now laid down on the circuit, there should be less sliding than was seen on Friday.

The pitlane opens, and as he heads out Hamilton reports a loss of power. However, moments later he heads out on to the track.

In a late directive, Michael Masi advises drivers: "I would like to provide the following clarification regarding the policing of the Turn 1/2/3 requirements for the Race Start or any subsequent Standing Start Restart ONLY:

Any driver who leaves the track at Turn 1/2 will be required to ensure that they re-join the track safely and do not gain a lasting advantage. In practical terms this will mean giving up any positions that were gained.

The instruction to go around the bollard at Turn 3 in this circumstance ONLY will not be a requirement.

However, he points drivers to Appendix L Chapter IV Circuit Article 2b to the FIA International Sporting Code, which states that...

"However, manoeuvres liable to hinder other drivers, such as deliberate crowding of a car beyond the edge of the track or any other abnormal change of direction, are strictly prohibited. Any driver who appears guilty of any of the above offences will be reported to the Stewards."

Hamilton is told that surface temperatures are lower than expected after he complains of low grip.

"We are aware they might go very aggressive with a two stop for example," admits Toto Wolff in the moments before the start. "We'll figure it out once it gets going."

As they head off on the formation lap, other than the leading ten, all bar Tsunoda and Ocon are on mediums, the Japanese and Frenchman opting for softs.

The grid forms as Mercedes complains at how slowly drivers at the back are getting into position.

An absolutely brilliant start from Verstappen, who out drags the Mercedes pair, who leave his a more than generous amount of room on the left-side of the track, and subsequently out-brakes them into Turn 1. However, into Turn 1, Ricciardo locks up and hits Bottas spinning the Mercedes, while Perez cuts the corner in an avoiding action.

Stranded in the middle of the track and facing the wrong way, Bottas is helpless as the field passes by.

Further back, as the field is funnelled as it attempts to pass Bottas' Mercedes, Ocon is sandwiched between Tsunoda and Schumacher, the result is inevitable as both drivers hit one of the Alpine's front tyres. Amazingly, while the AlphaTauri and Haas are out, Ocon is able to continue.

Schumacher and Tsunoda climb from their cars as Ricciardo pits, as does Bottas.

The safety car is withdrawn at the end of lap 4 and Verstappen pulls the trigger.