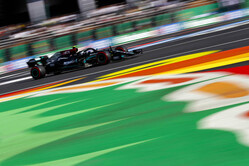 Mercedes driver Valtteri Bottas took pole on the soft tyre ahead of his team mate Lewis Hamilton, but he will start the race tomorrow on the medium tyre that he used to set his fastest time in Q2.

Nearly everyone used the medium to get through Q2, to aim for the fastest one-stop strategy tomorrow. As well as Bottas, all the other drivers in the top 10 of the grid will start the Mexican Grand Prix on the medium tyre. Although AlphaTauri's Yuki Tsunoda set his best time on the soft in Q2 and qualified in the top 10, he will start from the back of the grid on the red tyre.

Tsunoda is not the only driver to be affected by penalties for engine changes: Alpine's Esteban Ocon, McLaren's Lando Norris, and Aston Martin's Lance Stroll will also start from the back of the grid, while Williams driver George Russell has a five-place penalty for a gearbox change.

Temperatures stayed warm throughout qualifying, with around 22 degrees centigrade ambient and 45 degrees of track temperature, which fell progressively throughout the elongated qualifying session.

The fastest way to approach the 71-lap Mexican Grand Prix is definitely a one-stopper, as there's quite a high time loss in the pit lane (around 22 seconds on top of the actual stop) and it's hard to overtake on this circuit.

P Zero Yellow medium C3 followed by P Zero White hard C2 is the optimal tactic, which is why so many drivers wanted to get through Q2 on the yellow tyre. This also allows for quite a wide pit stop window.

P Zero Red soft C4 followed by the hard is also feasible (although slower) but there's not so much flexibility, as the soft tyre will need to be managed over a shorter first stint compared to the medium runners.

The best two-stopper would actually be medium-hard-medium but this is slower than a one-stopper. As always, track temperature will be a key factor, with warm conditions expected for tomorrow's race. With more rubber now laid down on the circuit, there should be less sliding than was seen on Friday.

Mario Isola: "Practically all the drivers tried to get through Q2 with the medium tyre in order to run the fastest strategy tomorrow, which is definitely a medium-hard one stopper, as there's quite a significant time loss in the pit-lane and it's difficult to overtake. This option also gives a lot of flexibility around the strategy. As expected with more rubber laid down, the soft tyre showed a very solid performance in qualifying and so it could play a role in the final stint of the race tomorrow."