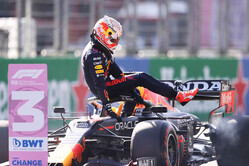 Having enjoyed a 0.6s comfort cushion over Mercedes in final practice, locking-out the front row for the Mexican Grand Prix appeared to be a formality, thereby leaving Red Bull with the difficult task of deciding on whether to issue team orders to local hero, Sergio Perez.

That decision appeared to be taken away from the Austrian team however, when Mercedes locked-out the front row, leaving their Austrian rivals third and fourth.

"Before that we were just struggling to get the tyres to work," admitted Verstappen at session end. "On the mediums it wasn't too bad but then on the softs, going into Q3, it just didn't click on the first run.

"It just was a terrible lap, just no grip," he sighed. "I knew there was a lot more in it if we could find a better balance with the tyres and it was a little bit better in the final run and it was definitely on for a good lap and challenge Valtteri's time...

"I don't know what happened in front of me," he continued, "but it must have been Yuki holding up first Checo and then both of them had to go wide. Then, because you arrive so quick it's difficult to pinpoint what's happening and I just saw a lot of dust so I thought a car had crashed.

"Now with the yellow flag rules, I've been caught here before in Mexico with it, so I backed out of it and then no yellow flag came, so I continued pushing, but of course that's already like two-and-a-half tenths gone. So, my lap was basically finished.

"What can you do? I'll have a look at what happened there exactly, but of course it was very unfortunate and not a great place to be after being so competitive the whole weekend but still, like Valtteri said, it's also a long run to Turn One. Starting third, normally on the cleaner side, there's been a lot of dust, so let's see. It's a, you know, long race."

Other than his issue with the softs, Verstappen was asked about his rear wing, which, like that of his teammate, had received much attention during the session, the TV cameras even revealing that tape had been used near the inner side of the endplate.

"Yeah, they were cracked after FP3," admitted Verstappen, "so we had to patch them up and basically they were like new to start qualifying.

"I don't think that had anything to do with it," he insisted, "but of course we'll have a look into it again."

The rear wing speculation followed the Dutchman's request early in the session to check for damage to his front wing after he ran over a kerb.

"They checked the car and everything, everything was alright," Verstappen confirmed.

"We just were really slow and just terrible grip in Q3," he added. "I think my last lap we recovered that a bit just by getting the tyres into a little bit in a better window. But still not to what we would've like and how the car has been behaving in all the practice sessions. So that's a bit of a mystery.

"But tomorrow we mainly race on different tyres anyway, so I expect the balance to be good again."

As for teammate Perez, who was widely expected to grab a historic home pole.

"Yes it was a pretty difficult one," he admitted. "Trying to manage traffic, trying to get a rhythm, the balance...

"I think my car was never the same since FP3 to qualifying," he added. "We had to do a couple of adjustments and once we got on top of it, all of a sudden, I find Yuki into Turn 11 and I lost a lot of downforce already into 8, 9, and that hurt a bit.

"The distraction was the fact that I was too close to him on braking," he admitted. "Once I braked there was no downforce and I just lost it. I think P3 was possible, but the Mercedes were too quick today.

"I will give it a go," he said of the race. "I'd rather finish on the podium than not finish, so I will give my maximum tomorrow."