Verstappen not thinking about title 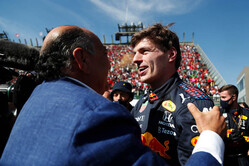 For Red Bull and Max Verstappen, Mexico really was a roller-coaster weekend.

Having dominated thepractice sessions, the Austrian team was left reeling on Saturday afternoon when, against all odds, Valtteri Bottas led a front-row lock-out for Mercedes.

Twenty-four hours later however, with Red Bull still effectively licking its wounds, Bottas gifted Verstappen the opportunity of a lifetime, allowing the Dutchman to take an early lead.

Despite opening a 19-point lead in the championship however, the youngster is not allowing his thoughts to turn to the title.

"It's a long way to go, but it's of course looking good," he said, "but also it can turn around very quickly.

"But I'm looking forward to Brazil," he grinned. "I have also good memories there.

"I don't believe in momentum," he continued. "So every single race we have to try and nail the details and we didn't do that yesterday, so you know, things can go wrong very quickly or can go right.

"It's going to be really tight and exciting to the end," he added. "This has always been a track that is really good for us so I expect Brazil not to be like it was today."

Asked about his dream start, he said: "It was nice three wide... it was all about just trying to brake as late as we can.

"I kept it on the track and went from third to first, and that was basically what made my race, because then I could just focus on myself.

(There was) incredible pace in the car, so I could just do my own thing... I mean, you never know what the others are going to do, right? But we made it stick.

"Yesterday I don't know. It was just a bit unexplainable," he said of qualifying. "But today, of course, it was very important. The first lap and the start…

"We went three-wide and it was about who was going to brake the latest and I got both of them into Turn 1, so that it gave me the race and I could just control it from there."

Though teammate, Sergio Perez was unable to make it a 1-2, Verstappen was full of praise for the Mexican.

"Checo, the last few races, has really picked it up and he's there, you know. He was pressuring Lewis really well towards the end.

"It's really good to have both cars on the podium, especially for Checo here at his home Grand Prix. That was incredible to see."