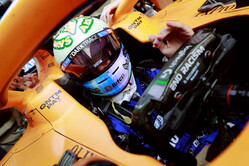 Lando Norris: "After nearly two years away from Mexico City, it's really great to be heading back. It's an awesome city with a cool circuit right in the middle of it, which always makes for a great atmosphere. It's quite a unique track, but one I enjoyed driving in 2019, so I was disappointed when we didn't race there last year. Mexico marks the start of a long triple-header, with an intense run of races over the next three weeks. Despite that I've been working hard on my preparations in the sim, making use of the time since Austin to prepare for all three tracks. I'm feeling ready to get back to it, and I can't wait to get on track again."

Daniel Ricciardo: "I'm looking forward to heading back to Mexico, it's been too long. The atmosphere is always incredible and that stadium section is an awesome part of the circuit, the fans are also some of the most passionate in the world. We're really lucky to be racing there and in Brazil back-to-back because the excitement around the races is unreal. I'm expecting a similar battle to the one we had in Austin, although having not raced there last year, it's hard to say where we'll truly be in terms of performance. We'll just keep focusing on what we can do as a team, try and score the most points as possible and see how the field shakes out. Viva Mexico!"

Andreas Seidl, Team Principal: "After an incredible atmosphere last time out in Austin, we head to Mexico anticipating much of the same. The Mexico City Grand Prix kicks off an intense period of racing for the team, with three back-to-back races and plenty of long flights. This scenario brings plenty of challenges, but also plenty of opportunities, and we'll be working hard to extract maximum performance at each race. Mexico offers a unique challenge in terms of set-up that can often shake up the competitive order. The high altitude and thinner air mean we run higher levels of downforce than we usually might on a circuit like Mexico, and that can be tricky to get right. We've been working in the simulator to ensure we have as much data as possible heading into the weekend.

"With only five races left of the season, we know that every race counts and that there's no time to let down our guard. We know it will be a challenge to retain our position in the Constructors' Championship, but it's a challenge we're ready for. We'll maintain our focus on the variables we can impact and keep up the pressure on those around us."