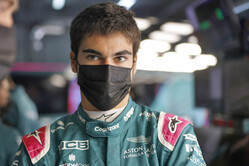 Lance: "It's been good to have the week between the US and Mexican Grands Prix to reset and come back stronger. While our US GP didn't quite go to plan, we showed good race pace on Sunday, so the goal is to qualify well and fight for points in the race. It's quite a short lap in Mexico, but the long straights offer lots of slipstreaming and exciting racing."

Sebastian: "I have always enjoyed coming to the Mexican Grand Prix. The fans are so passionate, and the lap is really challenging, so I'm excited to get going. We want to pick up where we left off in the US and build up a run of points scores. Preparation and reacting well is key because tyre performance is critical and the race can be interrupted by Safety Cars and Virtual Safety Cars."

The altitude effect is a key part of racing in Mexico and affects car performance in multiple ways. Lying at 2,240m above sea level means the air pressure is lower, so both the drag and downforce produced by the cars is reduced. This creates a challenging car set-up conundrum for both team and driver.

The C2, C3 and C4 mid-range tyres have been allocated for the 10th time this season, and, while familiar, the Soft tyre usually experiences high degradation. While it requires extra management in the race, picking the correct tyres in Saturday's Q2 can prove influential to success on Sunday. Expect teams to differ in strategy, with one- and two-stop strategies both proving successful in the past.

Despite three DRS zones and the second-longest run between the start and the first braking zone (after Sochi), overtaking difficulty is considered above-average. There were just 40 and 36 overtakes in 2019 and 2018 respectively, with DRS required for over 70% of passes, reflecting the challenge of making a move outside of DRS zones.