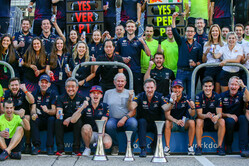 Max Verstappen: "It was an exciting race and it feels incredible to win here in front of all the fans. The pressure was on for the whole race and not knowing how quickly Lewis would catch up. I actually thought I had a decent start, but Lewis had an even better one. So we went for an aggressive strategy after losing the lead into turn one and we pitted early in the first stint. Then for the middle stint we were in that undercut range, so we had to respond and we went for track position which made the last stint very long, especially in this heat. The last two laps were definitely difficult on the tyres, there wasn't much grip left. But, then with two laps to go, I had the Haas in front of me and I was able to benefit from the DRS, so we managed to hang on in the end. We definitely gave it our all today as a Team and it was great to have Checo up there with me on the podium."

Sergio Perez: "That was the hardest and longest race of my life. I wasn't feeling great before the race and then my drinks system stopped working on the first lap and with the hot weather today it was very physical and a pretty tough afternoon. I was struggling massively and by lap 20 I was done, so it was a shame I couldn't keep up with Max and Lewis but there are a lot of positives to take from this weekend and back to back podiums are always nice. It's a good result for the Team, the undercut worked well and Lewis had no option but to cover me which helped Max out in front, so we can be very happy as a Team. I'm so looking forward to Mexico, the Team have done well there in the past and I think we'll have a good package for my home race. I can't wait and I hope to be on the podium again in front of my home fans."

Christian Horner: "What an incredible victory and double podium for the Team! It's our first US GP win since 2013 and what a way to do it. At the beginning of the race we had really good pace on the mediums and Max was able to put pressure on Lewis, but we know that he is so strong at the end of the race and he went long which bought himself an advantage. So we went for track position and Max held on and managed the race superbly, especially his last stint on the hard tyre to have enough left to keep his lead at the end. It was a tough race for Checo with no drinks system, but again the way he managed the race was fantastic and you can see him growing in confidence with his second podium in consecutive races. He produced a phenomenal drive and with his home race coming up he's finding his form, which is crucial for us at this time of year. It's five to go now, and we know that there are a couple of races where Mercedes will have the edge and a couple where we will be strong, so the rest of the season is going to be really tight."