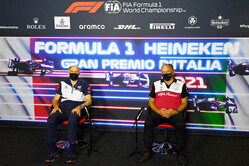 Q: Fred, there is an awful lot going on in the world of Alfa Romeo at the moment, so it's probably best to do it in chronological order. So first, can we just get a word on Robert Kubica's performance last weekend at Zandvoort. Did he surprise you?
Frederic Vasseur: Honestly, yes, because he did a great job, He jumped into the car on Saturday morning. I think that Zandvoort is not an easy one. We saw on Friday in FP1 and FP2 that the difference between the drivers was huge, much bigger than anywhere else, and Robert had to jump into the car at the last minute for FP3. IO think he did very well in FP3 and quali and I was even more surprised after the race because that was the first time for him to drive the car with high fuel since 2019 and at the end he did a great job. He had a good fight with Seb Vettel and he was even able to overtake Latifi into the last lap. I hope that he enjoyed the weekend and that was also part of this and now he is back into the car in Monza from the beginning of the weekend, with a different approach and I hope that he will do a good again.

Q: He's got a much smoother start into the weekend, starting in FP1. What are your hopes for him here?
FV: Even if he has the experience of last week, it's quite a difficult exercise because after Zandvoort Monza is also not the easiest one. It's a very low downforce track and you have to find the braking reference and so on. But I think it's OK. He has a lot of experience. He's able to build up his own pace during the weekend. It's a long way until Sunday and I'm sure that he will do a good job.

Q: Do you expect Kimi to be back in Russia. How is he and what have you heard from him?
FV: I spoke with Kimi this week. He's OK and he has no big symptoms. But you know the protocol that when you are tested positive that you have to stay 10 days in isolation. It means 10 days is Sunday or Monday and I hope that he will be back in Sochi for sure.

Q: Let's talk about your recent driver announcement - Valtteri Bottas joining the team next season. Why Valtteri?
FV: Why not? No, but he's a frontrunner in the championship over the last five years. If you compare with Lewis, he had always a huge performance in quali, he was something 0.2 per cent off average and he will bring also his own experience and the fact he worked with Mercedes will be an asset for sure. And regarding Valtteri I think the other point is that from his own side I think he wants to have a mid-term project, this is an important step, and also to be able to be somehow the leader of the team and he was always next to Lewis and he will have to take more responsibility with us for sure and this will be a challenge for Valtteri but I think he is ready to do it.

Q: You worked with him in the junior categories, what are Valtteri's standout qualities?
FV: For me he is a competitor. I remember perfectly the season in GP3 in 2010 or '11 the start was difficult but then he was able to put everything together and to win six or seven races in a row. If you have a look over the last 10 years he was always on the podium, always fighting for pole positions and this is important because it's a kind of education to be at the front of the grid and for sure he will bring his huge experience to the team.

Q: And when can we expect news on the identity of your second driver for next year?
FV: As soon as the decision will be made! We always said that we wanted to have a look also on the junior series. It means that they are doing two races in a row in Monza and Sochi and probably by the end of September, with my shareholders, that we will discuss the point.

Q: Can you tell us who is on the shortlist?
FV: I don't want to give you names because if I forget someone it will be a drama. But you will do the list by yourself.

Q: Can you tell us how many drivers your are talking to?
FV: It's not because you are talking to someone that he is on the list. I think that Franz is also speaking with half of the grid because we are working in the same paddock, but it is not because you are speaking with something that you want to have the car in the car next year. You know that the list there probably five or six names on the list. Let's see.

Q: Franz, you are returning to Monza as the remaining champions, the latest winners of the Italian Grand Prix. Can we start by getting your memories of last year?
Franz Tost: Of course the memories are very positive and it was very emotional to win as an Italian team the Italian Grand Prix here in Monza. But you know this is past and now we have to be concentrated to this race weekend. The next step is the qualifying and the sprint qualifying and the race and I hope that we will be competitive, that Pierre will be within the first five or six cars and then we will see.

Q: I know you want to focus on this weekend but I did want to throw it back to Zandvoort and talk about Pierre's drive to fourth place. How good was he last weekend?
FT: He did a fantastic qualifying and of course a real good race. It was such a controlled race from his side. It was at such a high, mature level that it was really fun on the pit wall to observe him, because he had everything under control. After the start, when he kept the Ferraris behind him, it was Leclerc, which was quite close, and then how he managed the tyres was really very good and yeah, how he did the pit stops and everything, how he overtook Alonso was a very important part in the race and therefore he deserved this fourth position. It was a fantastic drive from his side.

Q: Was it the best race he's done for you?
FT: The best race was last year, because he won. This time he was only fourth. He did a fantastic race in Baku, when he finished third. I remember back in Sao Paulo last year, the fight against Hamilton for the second place. This was also a really good race. No, there are a couple of fantastic races Pierre Gasly showed us.

Q: We've talked a lot about Pierre and of course Yuki's staying with the team as well next year; you've got the same driver line-up. Was it ever in doubt?
FT: For me, personally, not, because nowadays if you bring a rookie into Formula 1 you must give him time. Formula 1 is really so complex, is so difficult that you can't expect a young guy coming, showing to the experienced drivers where to go. No. Yuki, so far has done a reasonably good job. He was fast, he finished in Budapest on the sixth position and his first race he was ninth in Bahrain. Of course he had some crashes but I always say the crash period is part of the education process, how will someone find the limit if he's not allowed to crash. Now I hope that this crash period is finished now. We are looking forward to the second half of the season although it will not become an easy one because all these young drivers don't know either America or Mexico nor Sao Paulo, nor Turkey. Saudi Arabia no one knows which means that there's a lot of work in front of us to bring him on a good level but, beside Pierre Gasly, who is one of the fastest drivers in Formula 1 nowadays, he can learn a lot, he can compare the data and with his skills, I think that he will close this gap and I'm looking forward to this driver line-up next year when we will have a new car, so at least we will have a constant and that's important for us.

Q: (Christian Nimmervoll - motorsport.com) Franz, this is a bit of a hypothetical one but I think you have data from the simulator which will have your answer probably. Max is widely regarded as one of the fastest if not the fastest drivers in Formula 1. If you would sit in an Alpha Tauri rather than in a Red Bull, do you think he would be able to score regular podiums and the occasional victory?
FT: Phew. I would like to have him in the team. You know we had him already, yeah? It's a hypothetical question because we must not forget Red Bull Technology, for me, is the most experienced and best design group in Formula 1 and the Red Bull car is for sure sometimes faster than the Scuderia Alpha Tauri car because they are operating on another level, they have much for people, therefore there is more money and they are the best engineers working there and therefore I think that Max has a fantastic car.

Q: (Alan Baldwin - Reuters) Fred, I appreciate that you don't want to give away too much information about drivers you might be talking to but Guangyu Zhou has been making a lot of headlines recently and particularly speculation about him becoming the first Chinese Formula 1 driver with Alfa Romeo. Can you just confirm: is he on your list and how good a chance has he got?
FV: He is like the other front runners in F2. He's doing a good job in F2, he's won a couple of races from the beginning of the season but as with the three other guys able to do pole position but you know that F2 this season is a bit different compared to the past because there are only four events so far but on difficult tracks because the first one was Bahrain, then they went to Monaco, Baku and the fourth one was Silverstone. I think Monza and Sochi are a bit more conventional and let's have a look at the evolution of the young ones but then we will see what happens and we are there.