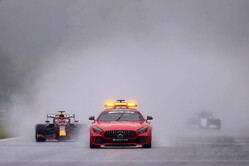 Weeks after that crazy, crazy race in Hungary, we have all the makings of another eventful afternoon, this time in Belgium.

An 'eventful' - to put it mildly - qualifying session sees Max Verstappen joined on the front row by George Russell, and while this might be a line we repeat a few times in 2022 - assuming Toto Wolff has made that particular decision - today the youngster is in a Williams.

Behind these two we have Lewis, Daniel - in his 200th GP start - and Pierre, the sort of line-up that Ross Brawn and the gang could only dream of when putting the idea of the Sprint together.

Perez lines up seventh, meaning that his teammate will have no support at the start as he deals with Hamilton and possibly his 2022 teammate, while Bottas starts from 12th following his penalty from Hungary.

Latifi starts eleventh, sandwiched by the Ferraris, ahead of Bottas, Alonso and Norris, who takes a 5-place hit after his team changed his gearbox.

Behind this little group we have Tsunoda, Schumacher, Mazepin, Stroll - another driver carrying a grid penalty over the summer break - and Raikkonen who will start from the pitlane after his changed his rear wing assembly overnight.

Following the events of the last two races, the big question is whether the Bulls - both of them - can survive the opening lap, especially at a circuit known for its first lap incidents.

Adding to the drama is the fact that the Weather Gods - no doubt feeling guilty after failing to deliver so many times this season - have finally come out to play, and just an hour before the start are positively chucking it down.

With an eye on Norris' big crash yesterday, not to mention the numerous other incidents in recent weeks/years, should the rain continue it is likely that the race will start behind the safety car - which should at least guarantee the Bulls surviving the opening lap.

Strategy will go out the window, though it is worth bearing in mind that the Bulls have more fresh inters available than their Mercedes counterparts.

Looking at the conditions it will be brave, or maybe foolhardy, to make any predictions, but it could well be that we get another surprise result like we did last time out in Hungary.

What the likes of Verstappen have to remember is that the points come at the end of lap 44, not at La Source, Les Combes or even the end of lap 1, so softly-softly has to be the approach.

On the other hand, what better opportunity for the likes of Russell, Norris or Ricciardo to spring a surprise.

The pitlane opens and one by one the drivers head out. As they head down the hill to Eau Rouge they trail the infamous 'rooster tails' we have grown used to.

"There's no grip out here," reports Hamilton, the Briton, like everyone else, on full wets.

No! Perez goes off and in the barriers at Les Combers. This time around he hasn't even made it to the grid. Another disaster for Red Bull. "That's us done," he is told, "kill the engine."

Russell reports that on his way to the grid he was six seconds behind the car in front yet still had no visibility.

Hamilton, admitting that he nearly "lost it in 18", adds that he's struggling for rear grip in particular.

Air temperature ahead of the formation lap is 12.7 degrees C, while the track temperature is 14.9 degrees. It is cold and wet. Indeed, as the rain continues to fall, race control helpfully advises that the risk of rain is 100%.

The formation lap will start behind the safety car.

"Is this rain going to stay like this," asks Hamilton. "Yes, we think it's here for the afternoon," comes the response.

"Can you please note down that the mirrors are different and we will discuss after the race," advises a rather stern Mazepin.

As the rain increases in intensity, the start is delayed but we are not advised for how long. At which point we are told the race will get underway at 15:10.

"If there is a red flag can we change the rear wing?" asks an opportunistic Sainz.

While most drivers remain in their cars, Hamilton heads off for a 'comfort break'.

Despite the conditions, the fans that line the track are clearly 'up for it'.

Following a further delay - to 15:20 - the first engine fires up. At which point the start is delayed a further 5 minutes.

Vettel is advised that the current downpour will last "around an hour".

The camera cuts to the Red Bull garage where mechanics are working on Perez' car.

"We expect this rain to continue for fifteen minutes, then heavier rain..." Ricciardo is told.

At 15:25 - on the dot - the tyre blankets are removed and the field heads off on the formation lap behind the safety car.

Verstappen has similar issues and says he needs to drop further behind the safety car.

"It's pretty awful, I can barely see the car in front," says Norris. "There's quite a bit of aquaplaning as well," he adds.

Despite all this, Verstappen, who only has the safety car ahead, insists that "it's fine to race". Whereas, further back, Giovinazzi reports that the "conditions are undriveable".

At which point race control announces that the start procedure is suspended. Red flag.

As the safety car leads the field into the pitlane, Ricciardo reports that he cannot see the rear lights on the car ahead.

"It really isn't that bad," insists Verstappen as he is told of the red flag. However, the visibility issues were further back.

"This is the right call," says Ricciardo.

Meanwhile, Red Bull is arguing its case with Michael Masi as to whether Perez should be allowed to start, Jonathan Wheatley insisting that the race hasn't officially started yet.

Asked about the prospect of holding the race on Monday, Aston Martin's Otmar Szafnauer replies: "We've got until 8pm or so. If we can start before 6pm let's run it!"

Meanwhile, Mercedes is now enquiring about whether - and why - Perez might be allowed to start.

At which point, the Stewards confirm that Perez will be allowed to start from the pitlane.

Michael Masi also reveals that the race is effectively already underway, and has been since the scheduled start time of 15:00. No, us neither. Surely, if the race has technically started, Perez has missed the start... which was almost ninety minutes ago.

In the Red Bull garage Perez is high-fiving his crew as his car appears to be ready.

Meanwhile, a number of those incredibly hardy fans are doing the Macarena! Brilliant stuff!