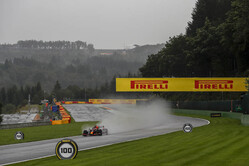 Red Bull's Max Verstappen claimed pole after a disrupted Q3 session, with a delay of more than half an hour after McLaren's Lando Norris hit the wall. When the session resumed with nine minutes to go, all the drivers used a single set of intermediates, with Verstappen beating Williams driver George Russell to pole.

The intermediate tyres were most commonly used today, with Williams being the only team to use them from the very start of Q1. After they went fastest, all the other drivers eventually switched to the Cinturato Green, which they used in Q2 as well, before switching to the Cinturato Blue full wet for Q3 ahead of the lengthy interruption to the session.

With the best times in Q2 set on the intermediate, this means that all the drivers will have a free choice of starting tyres tomorrow if it's a dry race.

The Cinturato Blue full wet was used at the beginning of qualifying, which was delayed by a few minutes to allow conditions to improve slightly. The session got underway with 15 degrees of ambient temperature and 17 degrees of track temperature. The track dried up relatively quickly once the rain eased, allowing intermediates to be used throughout the final part of Q3 after the delay.

All the drivers also used the intermediates during FP3 this morning, with the exception of the Haas duo - which ran the full wets - and Norris, who tried a run on the P Zero Red soft at the end of the session.

The 44-lap Belgian Grand Prix is always a complicated race to predict the strategy for, featuring the longest and most variable lap of the season, with unpredictable weather and a high probability of safety cars. In fact, it was a safety car that influenced the strategy last year, with nearly all the drivers changing tyres just once on lap 11: comparatively early in the race, meaning that careful tyre management was required towards to the end. On that occasion, the winning strategy was P Zero Yellow medium to P Zero White hard.

This year looks very different. For a start, race conditions are set to be much cooler than last year. And there's a strong chance of rain too, with the Cinturato Green intermediate tyres dominating the day's action.

Cooler weather should in theory make a one-stopper easier to achieve, but it might also push more drivers towards the P Zero Red soft, with a two-stopper coming into play, although in general teams like to limit the number of pit stops.

If it is dry, starting on the medium tyre offers the maximum flexibility, but with a wet qualifying session (as was the case today) and a dry race, all the drivers can start on whichever compound they choose out of their allocation.

Mario Isola: "First and foremost, we're all relieved that Lando Norris is OK after a very big accident at one of the quickest points on the circuit. This was an extremely tricky qualifying where it was very hard to predict the weather from one minute to the next, forcing the teams to think on their feet. Similar conditions are expected for tomorrow, so that particular challenge is set to continue. The intermediate tyre, which was used for the bulk of today's running, showed itself to be capable of handling a wide variety of wet and drying conditions. Tomorrow's strategy - where we don't even know yet which type of tyres the drivers will be starting the race on - is going to be mainly about adapting to changing circumstances, as we saw throughout today."