Horner: It's not in our culture to give up 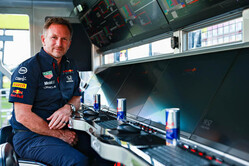 Christian Horner insists that Red Bull will not switch focus to 2022 while the 2021 titles are still up for grabs.

Following the three-week summer break, F1 hostilities resume this weekend in Belgium as Red Bull seeks to grab back the advantage at Spa Francorchamps.

The first-lap disasters at Silverstone and the Hungaroring have left Mercedes holding the lead in both championships.

However, while the majority of the teams have already switched focus to 2022 and the rules overhaul, Christian Horner insists that while the 2021 title remains possible Red Bull will continue to develop its current contender.

"It is embedded in who we are as a race team that it's not in our culture to give up on any season," he tells Motorsport.com.

"Of course we have the constraints of the budget cap as well, which makes life slightly more complicated," he adds. "But people have short term memories in this sport, and you've got to go for it."

"Every race is an opportunity," he insists. "If it means people have to work a little bit harder, and a few longer hours to enable that, then absolutely everybody is up to that challenge."

His comments follow Toto Wolff's admission that Mercedes had switched focus to 2022, though the German team was forced to revise that policy as the threat from its rival intensified.

"I don't know what their constraints are," says Horner, when asked if Mercedes original decision surprised him. "I can't judge other organisations without having all the facts.

"The cost cap is having a significant impact on their planning and how they've managed during the COVID period," he added. "All I can do is focus on what we're doing and we're very comfortable with the approach that we are taking. We've managed to keep the body of the team very much together.

"Obviously if they are two seconds ahead of us at the first race next year, that will be disappointing," he admits. "But I feel that we've got the balance about right at the moment."