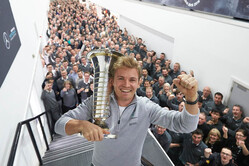 It will remain one of the sport's great mysteries... why, just days after winning the 2016 Formula One World Championship title, did Nico Rosberg walk away from the sport.

When news first filtered through, some thought it was a late (or early) April Fool, after all Spain's version, Dia de los Santos Inocentes, takes place in December.

But it was not a joke, Nico Rosberg had retired from F1... never to return.

Talking to The Times he reveals that at the time, having won the title, securing a new deal wouldn't have been an issue.

"There was $100 million on the table that I gave up on," he says. "(But) I longed for a different kind of life. You don't have flexibility when you're racing. It was the right decision for my family. I didn't think about the money for one second."

In the interview, the German, who now describes himself as a "sustainability entrepreneur", reveals his need for a sport's psychologist, whilst also shedding light on his relationship with Lewis Hamilton.

"He came on holiday with us on my dad's boat," he says of Hamilton, when the two youngsters were competing against one another in karts, but very good friends. One night, as they sat under the stars the pair fantasised about one day being teammates in F1. "And then that's what happened," says Rosberg. "Insane."

However, when the dream became reality...

"We had a battle inside a team," he says, admitting that having a friend as teammate changes the whole dynamic of the relationship. "You've got this changing balance of, I don't know… admiration? Respect?"

The feeling of team members 'taking sides' is almost paranoid.

"Sometimes it's one boss who is more on the other side. That's a tough, tough environment to be in," he says.

Indeed, he compares the rivalry to that of two band members who have worked together for years, realised their dreams only to end in a bitter feud.

"That's why they always break up eventually. Because there is so much at stake. They start fighting more and more and eventually break up because there's so much money at stake, so much recognition at stake.

"There were the two camps," he says, "the Nico camp and the Hamilton fans. And all the Hamilton fans were against me, of course. (One time) there were these four-year-old girls right in front of me with their dads, and they were booing me and giving me the thumbs down. Their dads had told them I was bad and that they needed to boo me.

Revealing that he sought the services of a sports psychologist, Rosberg admits that as the battle with his teammate intensified it was getting to him.

"At the time it was like, 'He's probably too nice to be world champion against the ruthless Lewis,' " the German admitting that there was some truth to it.

"I lost to Lewis three years in a row. And it was so painful, the last time. I locked myself in a hotel room. And I reminded myself that this is an opportunity to push, push, push like hell," he says. "It just enhanced my motivation, my focus.

"It went to the wire," he says of the 2016 title fight. "To the last corner. It couldn't have been more intense. And winning against Lewis, in the same car, after having struggled against him for decades? It was just so perfect."

Asked why he then chose to walk away, he replies: "I wanted to avoid going out as a has-been or someone who is not wanted any more," he says.