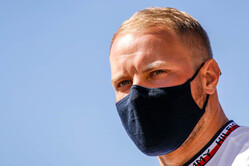 Following Sunday's Demolition Derby, Valtteri Bottas remains confident that it will not influence Toto Wolff when it comes to deciding the team's 2022 line-up.

Even before the dust had settled in the moments after Sunday's 'incident' mischief makers - including Pitpass it must be admitted - were taking to social media, opining that Valtteri Bottas' taking out of both Red Bulls at the first corner would surely lead to an 'announce' in the coming days.

Indeed, as George Russell slowed, on the instructions of the FIA, to allow Esteban Ocon and others through after the restart, as commentators mistook his slowing down for a puncture we even went so far as to suggest Bottas had been seen on a grassy knoll just opposite. It was that kind of day.

However, though the incident was Bottas' third DNF of the season, meaning the Finn has completed less (78.2%) race laps than anyone else - his teammate is the only driver on 100% - he in confident that Sunday's actions will not compromise his chances at Toto Wolff considers the team's 2022 line-up over the summer.

"We didn't speak about it," Bottas replied when asked if the incident will have compromised his chances. "I don't think one race will influence anything. I don't think so. We'll see in the next weeks what happens.

"If I'm honest, it would be nice to race next weekend and try and get a good race.

"But I guess it's time for a break and try to come back strong and try and have a positive start to the second half."

Other than Sunday's shenanigans, one wonders what Bottas will make of the decision to allow George Russell to test the 2022 tyres yesterday, albeit on a Mercedes mule.