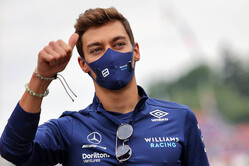 George Russell will be in action for Mercedes at the Hungaroring today as testing of the 18-inch tyres for 2022 continues.

The youngster's return to the cockpit of the Mercedes comes days after he and teammate, Nicholas Latifi finally opened Williams 2021 points account, the pair finishing seventh and eighth (Russell), following Sebastian Vettel's disqualification, and thereby leapfrogging Alfa Romeo in the constructors' standings.

Russell's outing comes as F1 prepares to shut down for the summer break, during which Toto Wolff has said he will come to a decision on his team's line-up for 2022.

Though Lewis Hamilton is known to be keen to maintain the status quo, in recent weeks Wolff had hinted at change, admitting that if he is dropped he will seek to find Valtteri Bottas the best alternative seat.

Of course, sceptics will feel that the Finn did his chances of retaining his seat a world of good with his first corner antics on Sunday, though that is not for us to say.

Standing in for Hamilton last year at the Sakhir Grand Prix, when the Briton was suffering from COVID, Russell impressed from the outset, only just missing out on pole, and though he subsequently led most of the race, a mistake by the pit crew and a subsequent puncture saw him finish a distant ninth.

Nonetheless, the Briton had impressed, and though Hamilton was back in action for the final round of the championship, most felt Russell had done enough to serve notice that it was time for him to move up.

Intriguingly, Russell's debut in an F1 car came four years ago, at the Hungaroring in the Mercedes, at the mid-season test. He subsequently tested for the German team in Bahrain and Abu Dhabi in 2019.