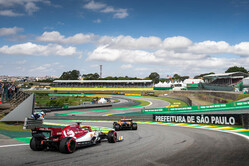 Organisers of the Brazilian Grand Prix are seeking to change the date of this year's race back to its original 14 November slot.

The event, initially scheduled for 14 November, was subsequently brought forward to 7 November to form a triple-header with the United States and Mexican Grands Prix as F1 sought a new slot for the (then) postponed Australian race.

However, with the cancellation of the Melbourne - speaking of which, get the Melbourne Cup latest Odds from all bookies - event officials in Brazil are seeking a return to the original date meaning the Interlagos event would take place the day before Republic Day, a national holiday, on 14 November.

Cancelled in 2020 due to the pandemic there were fears that Brazil would not feature on the calendar again as the existing contract with Formula One Management came to an end.

However, under new management a new 5-year deal was agreed, albeit with the event rebranded as the Sao Paulo Grand Prix.

"If this request is accepted, for us, the inflow of revenue in the city and in the state increases a lot," said Sao Paulo Governor, Joao Doria in a press conference on Monday. "We may have an expansion of 25 per cent in the Formula 1 revenue in Sao Paulo."

Thanks to the high vaccination rate in the state, Doria believes the event could go ahead with 100% capacity, albeit with all attendees compelled to wear face masks.

As ever in these times however, the uncertainty surrounding the pandemic is the overriding factor, with Brazil, like Turkey and Mexico on the UK's 'red list', which means that all personnel based in the UK must currently spend 10 days in quarantine on their return.

Meanwhile there is continued uncertainty over the events in Japan and the United States.

Currently, the scheduling of the Japanese Grand Prix means that personnel heading there from Turkey will avoid the need for the 10-day quarantine on their return to the UK. However, despite hosting the Olympics - albeit behind closed doors - the country's status remains uncertain.

Austin, which has held discussions with F1 over the possibility of back-to-back races, has seen a dramatic increase in COVID cases in recent days leading to the cancelation of a n umber of events.