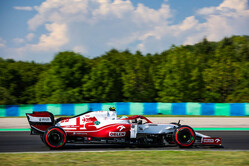 A sizzling hot day welcomed the start of on track action at the Hungaroring. Alfa Romeo Racing ORLEN recovered well from a challenging morning to close the day of practice for the Hungarian Grand Prix with a good amount of laps under their belts.

With temperatures soaring above 30C from the morning, the team was hit by a setback as Antonio Giovinazzi was unable to complete more than five laps in the first practice session, owing to a technical issue to his car. Reserve driver, Robert Kubica, was on hand to carry on the team's testing programme, completing 23 laps as part of his outing and providing useful data to the team's engineers.

In the afternoon, the returning Kimi Raikkonen and Antonio were able to recover much of the lost ground, putting in good mileage and bringing the team's programme to a close - even though the good work of the team was not fully reflected in the times, with Antonio's best lap deleted for a track limits offence.

Enough, however, was done to ensure the team has plenty of information to optimise the two C41s ahead of tomorrow's qualifying - the objective, placing both cars in Q2 on a track where overtaking remains a challenge.

Just as exciting as the good work the team did on track was the action outside the confines of the race surface. The Alfa Romeo Racing ORLEN Team Booth was one of the most popular attractions for the many fans braving the heat to crowd the grandstands: with a showcar the star of the show, alongside a racing equipment exhibition, merchandise stalls and other fun activities, the Booth was the centre of a real party atmosphere.

Fans interacted with their favourite Alfa Romeo Racing ORLEN stars, and in particular Robert, who is hugely popular with the local fans and the many Poles who did the trip for the race. Contests and competitions took place, with some lucky fans winning autographed and limited-edition items.

Ahead of qualifying, here's hoping we will give all our supporters at the Team Booth something to cheer about...

Kimi Raikkonen: "We were able to do a good amount of laps in FP2, but there's still work to be done with the set-up of the car. The balance is not yet where we want it to be, but we have a whole evening to improve it ahead of tomorrow. We'll only find out if we've done enough when we get to qualifying, hopefully we will earn a spot in Q2."

Antonio Giovinazzi: "Not the easiest day for us, but a good recovery in the afternoon, all things considered. A technical issue meant we effectively missed FP1, but we were able to make up some ground in the second session. Unfortunately, my fastest lap was deleted, so the standings don't look great, but we can be confident: hopefully we can be strong on Saturday. The fight for a spot in Q2 will be tight but we are going to give it our best shot and see if we can make it."

Robert Kubica: "It was a productive morning in difficult conditions, a session in which we managed to complete our programme. My day in the car was quite smooth and I am happy with the job I did: I am always keen to help the team progress and I feel my input gives a different perspective compared to Kimi's and Antonio's, who get to drive the car every session. Hopefully that can be of help to the team. Outside the car, it was very nice to have a virtual meeting with some of the fans in the grandstands. There's a lot of support for us here, we see it in our team booth in the fan zone, and we're keen to put up a good show for them."