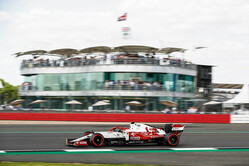 Alfa Romeo Racing ORLEN had a car in Q2 in the first ever qualifying using the "Sprint" format, with Antonio Giovinazzi finishing the session in P14. Team-mate Kimi Raikkonen set the 17th time, ending his involvement in the session in Q1, but both will aim to make up ground in tomorrow's 100km Sprint.

With today's session setting the grid for the novel session and drivers approaching qualifying with just one hour of free practice under their belts, the team approached the session aiming to make the most of the C41's performance after a good practice.

In the first segment, Antonio delivered a strong lap to finish 11th, while Kimi was unable to make progress and had to bow out, less than a tenth away from the safety of P15. Having made the cut, Antonio - who is entering the 50th race of his career this weekend - then set the 14th fastest lap of the session, edging Aston Martin's Lance Stroll for a spot on the seventh row.

With the grid for the Sprint now set, tomorrow's race will, in turn, establish the starting order for Sunday's race. Having made good progress in all races so far this season, we enter Saturday confident we can make up some ground and give ourselves a good chance for points in this weekend's showdown event.

Frederic Vasseur, Team Principal: "Every time we enter qualifying, we aim to place two cars in Q2 as a minimum objective: and even though we have made a big step forward compared to where we were when we raced in Silverstone last year, the margins are so thin that just a tiny gap means you miss out. Antonio did a good job in Q1 but unfortunately Kimi couldn't make the cut. In Q2, we were able to leave one of the Aston Martins behind but that was as far as we could go. We remain confident, however: our race pace has been stronger than our single lap's so far, and if we can make up some places in tomorrow's Sprint, we can be in a good position to mount a challenge for the points on Sunday."

Kimi Raikkonen: "We were hoping for more so to be out in Q1 is not great: there wasn't anything particularly wrong with the lap, but there was simply no more I could get. Now let's focus on the Sprint race: it's a new format so let's see what we can get from it. We need to do our best and make up some places as we have done in previous races to give ourselves a better shot on Sunday."

Antonio Giovinazzi: "It was quite a peculiar day, but it was fun to have just one hour of practice and then go straight into qualifying. Once again, we were strong enough to get into Q2, but that was pretty much as far as we could go. We were a bit too far from Q3 today. Let's see how it goes tomorrow: the Sprint will be important for Sunday and we approach it with a simple strategy - get positions on lap one but try not to take too many risks. Making progress after the start won't be easy with no stops, but we can still aim to gain ground in the opening stages."