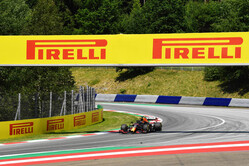 Red Bull set the pace with the P Zero Red soft C4 tyre during both free practice sessions at the Red Bull Ring today, with Max Verstappen going fastest in the morning and then again in the afternoon.

Although there were a few drops at the start of FP2, the rain never really materialised during the sessions and the drivers could run on slick tyres throughout the day. The weather remained reasonably warm at around 24 degrees centigrade ambient and 39 degrees on track in the afternoon.

The drivers had a 'green' and slippery surface to contend with, offering very little grip, especially during in the morning when Formula 1 was the first session of the day on track. The rain before FP2 reset the track slightly, emphasising track evolution during the session.

The gaps between the compounds are quite small over the short and flowing 10-corner lap in Austria, although the rain before FP2 made it hard to accurately measure the expectations. The performance gap between the soft and medium is currently around 0.5 seconds approximately, with the gap between medium and hard standing at roughly 0.3 seconds.

Mario Isola: "The changeable weather influenced the action today at the Red Bull Ring, with the teams in a hurry to collect all the data that they needed before any rain fell - which was the case on FP1 and particularly at the beginning of FP2, although it was never enough to seriously affect the action other than track evolution in FP2. This uncertain weather is expected to remain for the rest of the weekend, which could provide an extra element of unpredictability in terms of strategy. The information collected today on the medium and soft compounds will also be valuable for next week, when they become the hard and medium selections for the Austrian Grand Prix, while the C5 arrives as the softest compound".