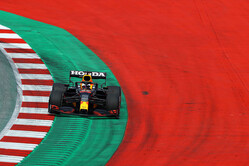 Verstappen set the pace earlier in a session in which there were three Honda-powered cars in the top five, a top five the included the Mercedes duo.

However, it's not all good news for the Honda runners as the Japanese manufacturer explains: "After FP1, we noticed something on the data from Gasly's PU. Unfortunately, it will take some time to check, so he will not be taking part inFP2."

Also looking strong was Alpine, while McLaren has yet to show its hand.

While there were no reliability issues earlier, almost everyone fell foul of the strict track limits rules which apply at Turns 9 and 10.

As the lights turn green it is raining trackside. Raikkonen, whose car was driven by Robert Kubica in this morning's session, is first out.

With an eye on the sky, in no time at all there are 18 drivers on track, Bottas (and Gasly) the no shows.

"It is raining a bit heavier now," reports Sainz.

A mixture of mediums and hards, though Russell is on softs.

Alonso improves to 6.651 to retake the top spot from Verstappen after the Dutchman posted 6.722.

"It's raining a bit but the track is okay," says Perez.

A tailwind into Turn 3 is causing problems for drivers, among them Hamilton.

A spin for Sainz as he exits Turn 4, the Spaniard flummoxed as to what caused it.

Hamilton raises the bar with a 6.358, but moments later Verstappen responds with a 6.192.

As Bottas finally heads out, Ricciardo goes fourth (6.687), while Alonso is the first driver this afternoon to have his time deleted.

On the red-banded rubber Vettel goes top with a 5.934, teammate Stroll posting a 6.079 to go second.

Hamilton switches to softs and following a weak opening sector goes quickest in S2. He's quickest again in S3, crossing the line at 5.796 to go top.

Hamilton retakes the top spot with a 5.335, while a 5.748 sees Ricciardo go second moments later.

However, no sooner has Hamilton's time been deleted than Verstappen takes his place courtesy of a 5.412.

Norris splits the Aston Martin pair with a 5.994 to go seventh.

Sainz is warned about "higher wind intensity" as he and his teammate seek to improve on 11th and 13th, the Maranello outfit looking likely to encounter a weekend pretty much as difficult as it had in France.

Now that is unusual, Bottas spins as he exits his pit slot, the Finn doing well not to clout McLaren crew members who were standing nearby. Indeed, Paul Thomas, McLaren's sporting director, complains to Michael Masi.

The incident will be investigated.

"I've got a lot of understeer at high speed," reports Verstappen.

Elsewhere, Hamilton exceeds the limits at Turn 10 for the umpteenth time.