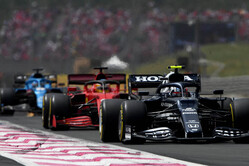 Pierre Gasly: "I think objectively it was a good race, we finished behind some strong competitors and we can't be too dissatisfied with that. Obviously deep inside I would've liked to have finished even further up the grid in front of my home crowd, but it was a difficult race and I think we did the best we could've today. We lost two positions with the pitstop, both Ricciardo and Charles getting the undercut, and that cost us a bit. We'll have to review the data and see if we could've done anything differently. I gave everything I could out there today, and we had some great fights, so I have to be pleased with that. At the end of the day I think to finish P7 is still a strong race for us and we're taking home some good points."

Yuki Tsunoda: "The first lap was really good, I started from the pitlane and managed to make up three places. We got stuck behind the Alfa Romeos, who were on a different compound, so we tried to make the undercut work with the Hards. I had to push from the very beginning on that tyre though and by the end of the race they were completely gone. Again, I have more mileage and race experience in a Formula 1 car so that's really positive for me. I now just need to work on my Qualifying so that I can start the race further up the grid and have a better chance of scoring points."

Guillaume Dezoteux (Head of Vehicle Performance): "It's been a successful but difficult race today. We managed to bring home a seventh place with Pierre, which is a nice reward for the weekend. After the morning rain, the track had a big reset and the tyres grained quite badly, not only on our cars but on most of the field. In the race, we had to do a lot of tyre management to stay on the one stop strategy and Pierre did a fantastic job at attacking and defending throughout. With regards to Yuki, it was obviously quite complicated starting from the pitlane, but he showed a good pace on the opening laps. However, after the stop, in free air, he couldn't make as much ground as we would have hoped. We will analyse everything and see what the key learnings are for him going forward. Today we increased our gap to Aston Martin by 3 points, which is really positive. The fight in the midfield is very tight but we are up for the challenge and our competitors can count on us to make their lives difficult until the final race in Abu Dhabi."