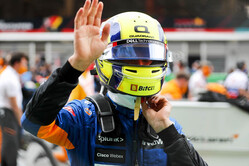 Lando Norris has hit out at 'fans' who claimed the Briton showed disrespect to teammate Daniel Ricciardo during last weekend's Monaco Grand Prix.

While the previous management treated social media and the like with suspicion bordering on contempt, under its new ownership F1 has actively encouraged it making much of its improved reach.

However, as is so often the case with social media, this has encouraged a new type of 'fan', one who feels empowered to vent their feelings towards anyone they don't like or disagree with, emboldened to act as judge, jury and would-be executioner.

In the wake of last weekend's Monaco Grand Prix, which saw Lando Norris claim his second podium of the season, thereby consolidating third-place in the driver standings, the Briton was on the receiving end of criticism from the 'Twitter-mob' for appearing to disrespect his teammate, Daniel Ricciardo.

On passing the Australian to lap him, Norris - pictured here clearly mocking Ricciardo on the Portimao grid having qualified 9 places in in front of him (a joke) - signalled his thanks for the clean move. However, in the eyes of the Twitchfork brigade, the Briton was actually mocking his teammate.

Not so, says an angry Norris, who took to his Twitch account to set the record straight.

"All right, so I see so many of you make up absolute crap and nonsense as usual," he said. "By the way, any time someone lets me pass for a blue flag, anyone, if they get out of the way properly and they should, I put my hand up and say thanks, all right?

"I did it to freaking everyone," he continued, "Mazepin, Schumacher, Danny... whoever I passed and they got out of the way, I put my hand up and say thanks.

"So, don't just notice one when I passed Danny and think I'm doing something that is not right. Let me just get that point across because I see a lot of stories that people make up."