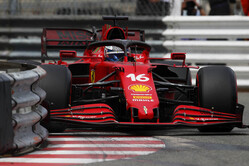 Fellow drivers have dismissed the claim that Charles Leclerc's crash in the final moments of qualifying was deliberate.

As ever, the suggestion came from the British media, which never misses an opportunity to raise the infamous incidents involving Germans, Michael Schumacher and Nico Rosberg.

Indeed, as Sky presenter Simon Lazenby talked with Nico Rosberg ahead of qualifying, he raised the German's move in 2014 when he overdid it at Mirabeau and then reversed back on to the track. The resultant yellow flags forcing teammate, Lewis Hamilton, to slow and thereby allowing Rosberg to claim pole.

The stewards investigated the incident and deemed that Rosberg had not acted deliberately in their view, but nonetheless the (British) media continued to think otherwise.

When Lazenby raised the incident ahead of qualifying, there was an embarrassing moment as Rosberg refused to bite, however, following Leclerc's crash at the Swimming Pool - which was already the subject of stringent analysis by the judge, jury and executioner that is social media - the opportunity was too good to miss.

When it was subsequently pointed out that in IndyCar if a driver causes a red flag in qualifying they lose their best two laps from that segment, and that Leclerc should face similar punishment, Max Verstappen - who was looking very good for pole - jumped to the Ferrari driver's defence.

"I think there is a difference when a guy makes a mistake and hits the wall, or doing it intentionally," said the Dutchman. "I think had Charles just parked with a broken front wing, it's a different story. But of course he just clipped the wall, initially, and then ended up where I've ended up twice! So, it's just unfortunate.

"Of course, I'm disappointed to not have a shot at pole," he continued, "but that's life. Sometimes you can't do it. It's fine.

"I don't think his lap should have, or should be deleted in the future if possibly they want to make rule changes. I don't think that would be fair - because we're all trying so hard - and it's not so easy around here, especially on the limit. It's easy to make a mistake."

"I can get where it's coming from," said Leclerc, And surely if I was doing it on purpose I would make sure to hit the wall a bit less hard but that wasn't on purpose, obviously.

"I was pushing the limit and, for now, I'm just worried about the rear of the car. I hope it's OK. It doesn't look OK but let's wait and see.

"As Max said, on a city track like this, where we are pushing the limit, it happens to do a mistake. It's a different story when it's done on purpose but I think it's pretty obvious for today."

"That was a proper impact," said Toto Wolff when pushed by the media. "Such a crash could put you in real jeopardy if the gearbox is broken, it was a real impact."