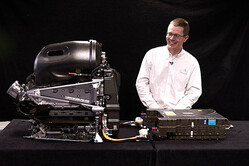 Despite attracting a number of Mercedes engineers to its new powertrain division, Christian Horner claims to be surprised at speculation linking their former boss, Andy Cowell with Red Bull.

Consequently, with Mercedes having announced last June that Andy Cowell, widely recognised as the main architect of Mercedes phenomenal hybrid power unit success, was to leave his position as Managing Director, it comes as no surprise that he too is being linked with the newly formed company.

At the start of the Monaco weekend there were claims that the deal is done and that Red Bull has effectively come up with an offer that Cowell could not refuse.

"Obviously there's a lot of media traction on these topics with personnel joining this obviously new venture," said Christian Horner, "but I can say I was surprised to read this story this morning that apparently Andy has agreed to join us because that isn't the case."

"I speak to Andy every week about different things," said Toto Wolff, "and for me it doesn't seem that he is going to Red Bull.

"But in this sport we have seen many black swans," he added, "so at the moment, what I think is he's not going there."

Asked how much of a surprise it would be should Cowell make the move to Red Bull, the Austrian replied: "It would be a big surprise because it would mean it's different to what we have discussed.

"But there is nothing stopping him from taking any decision, whether he continues on his entrepreneurial journey or returns to Formula 1 in a different role."