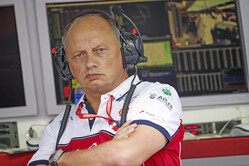 Alfa Romeo team boss, Frederic Vasseur has hit out over the decision to enforce more rigorous tests on bendy wings, insisting the move will cost the smaller teams money they cannot afford.

While the 'bendy' wing saga is mainly focussed on Red Bull, it is believed a number of other teams will have to take action before the 15 June deadline proposed by the FIA.

Among those teams thought likely to have to make changes is Alfa Romeo, and speaking to the media, a visibly angry Frederic Vasseur hit out at the move.

"I'm a bit upset with the approach to change the rule," he admitted. "To change the value of the test is not fair at all because the business of the engineers in F1 and the designers is to design parts at the limit of the regulation.

"If you change the regulation in the course of the season, you will have to design new parts and the teams who are saying that they won't be affected, it's a joke," he added. "It will affect everybody.

"At the end of the day, we have the regulation with the maximum deformation under load and I think we are not more clever than the others," he continued. "Everybody was sticking to the limit, and the FIA decided to change the limits.

"It's a bit surprising, but they changed the load and the deformation... and in the course of the season. It's not the introduction of a new test or a new way to do the test, it's just that they change the value.

"This is the first time that we see something like this," he continued, "because if you are at the limit, if you did a good job, you have to produce new wings. But in terms of cost-saving, it's a huge, huge, huge effort. We have time to do it, but it will cost us a fortune.

"We are all fighting to try to save money, to speak about reducing one person at the track. And then we have these kinds of things that is just a joke, a joke for me."

McLaren's Andreas Seidl and Toto Wolff however, argue that the tests should be introduced sooner, the Austrian claiming that the 15 June deadline effectively gives the likes of Red Bull a 'free race' in Baku during which time they are allowed to continue with their alleged bendy wings.

Indeed, the Mercedes boss has suggested that his team could protest the result in Azerbaijan.

All of which contrasts with last year's duct-gate saga, when, despite a 400,000 euro fine and the loss of 15 points, Racing Point was allowed to continue using components knowingly copied from Mercedes with nary a peep from the German team.