"It's a marathon, not a sprint," says Hamilton 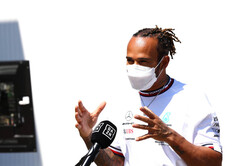 Insisting that there is a "healthy respect" between them, Lewis Hamilton hopes to prove the sceptics wrong by avoiding a clash with title rival Max Verstappen.

While there was clear contact on the opening lap at Imola, thus far the fight between Lewis Hamilton and Max Verstappen has been clean.

However, with an eye on what's at stake, not forgetting a certain Dutch racer's no-nonsense, elbows out reputation, some are predicting that at some point the championship battle will result in an on-track clash. Indeed, recently, Zak Brown, increasingly the font of all F1 knowledge, claimed it was only a matter of time.

Speaking as the Monaco weekend got underway - the Principality having witnessed more than its fair share of too close encounters over the years, Hamilton said he is adopting a long-term approach to his fight for the title.

"I think I've done well to avoid all the incidents so far," said the Mercedes driver, "but we've got 19 more to go and we could connect... hopefully not.

"I think the good thing is that I think there is a nice balance and amount of respect between us," he added.

"I think perhaps he feels he has a lot to prove," the Briton continued. "I'm not necessarily in the same boat... I'm more long-term. It's a marathon not a sprint sort of mentality, which is ultimately why I have the stats that I have. So I'll continue with that and I'll do everything to make sure that we avoid connecting."

Like team boss, Toto Wolff, Hamilton insists that Red Bull head into the weekend as favourites.

"Red Bull were incredibly close two years ago," he said. "It's a much different car, we have different tyres. Red Bull are going to be very, very hard to beat this weekend.

"This is a track that has always been strong for them, and given how close the gap is between us, you can imagine this weekend they could be ahead. But we're going to do everything we can to make sure that's not the case."