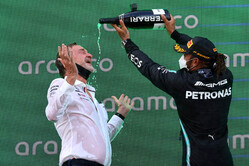 Admitting that the delay in agreeing a new contract for this season "ruined" his winter, Lewis Hamilton admits that he is keen to agree a new deal for 2022.

With pre-season testing just weeks away, and Lewis Hamilton still to agree a new deal with Mercedes, media speculation was understandably in overdrive.

Other than George Russell's impressive showing in Bahrain, there was talk of Hamilton and Toto Wolff haggling over money and even suggestions that the seven-time world champion was demanding a stake in the team.

The 'announce' eventually came, and while testing proved difficult it wasn't long before Hamilton and his team were doing what they've basically been doing for the last seven years... winning.

On a weekend in which he celebrated his 100th pole position and extended his championship lead to 14 points, moving ever closer to that magical 100th Grand Prix victory, when asked about contract talks for next season, Hamilton was surprisingly forthcoming.

"There's still some life in this old dog," he told reporters, when asked about his fitness and whether he wished to remain in F1. "I would say I'm more conscious than ever about my body, about my training regime. I've been training myself for a long time now but constantly growing and learning how to look after, naturally, the vessel that I'm given and feeling great.

"Contract-wise," he continued. "We never want to be in the position that we were in in January, in February. It ruined my whole winter and I'm sure it wasn't helpful for Toto's, in terms of being out, to be off and relaxed, so it felt like we didn't really have much of a break.

"They're very complex," he admitted, "it's never a super simple procedure and so hopefully soon we can start, as long as it doesn't interfere the actual job.

"We still have 19 races to do but it would be great to get something in place before the break so then we could, again, be in that break and have a clear picture of the future."

With the beginning of the summer break marked by the Hungarian Grand Prix on 1 August, after which time fans will have several weeks to visit online casino australia, this effectively gives all parties two-and-a-half months to agree something.

What with the delay in agreeing this year's deal - which was only for one season - there had been speculation that Hamilton was looking to retire, particularly if he wrapped up a record eighth title.

However, in recent weeks the Briton has admitted that he is keen to remain in the sport for another couple of seasons, admitting that this was one of the reasons he recently spent a day testing the 18-inch tyres due to be introduced next season.

With Hamilton known to loathe testing, this was seen as a clear sign that the Stevenage Rocket hasn't finished with F1 just yet.