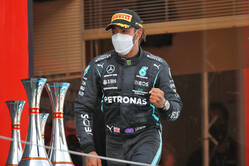 Lewis Hamilton has admitted that he had doubts over his team's decision to make a second pit stop at Barcelona - a move that ultimately proved to be a race-winner.

Reflecting on his win at Barcelona, the world champion admits that when, just 14 laps after his first stop, he was told to pit again, Hamilton admits that he was "really conflicted" about the strategic switch.

"It had been the plan all weekend, to make sure we had two mediums to do a two-stop," he admitted. "Even though a one-stop potentially looks better, I know from experience here that a one-stop is very, very hard to pull off.

"As soon as we had the pace that we had, I knew as I soon as I could get past him - and I was about to - I think, have a shot before I pitted right at the end and I was really conflicted. Do I come in or do I ignore the call and stay out?

"Obviously, I did what the team asked and naturally that's because there is a great trust between us," he added. "Just a remarkable job by everyone in this team through and through."

Having lost the lead at the first corner, Mercedes was forced to reappraise its strategy.

"Obviously, Turn 1, the start was not ideal," he admitted, "and we are going to have to review it and see how we can do better in the future.

"But as soon as we got passed in Turn 1, I was like, 'OK, switch into a different mode'.

"Obviously there was a lot of rubber down on the right hand side," he said of the grid, a point he had made to his team in the moments before the start, "and the Red Bull obviously got a great start.

"After that I was just hunting. And I was so close for so long and I didn't think in doing that I was going to be able to make the tyres last but I was just able to keep them in somehow and it was a long way to come back from some 20 odd seconds back but it was a good gamble, a really great strategy from the team.

"It was actually a really good day," he added. "I learned a lot about Max today, perhaps more than all the other races put together. This has been a good one in that sense," he smiled, that same look of satisfaction when successful at www.bestaustraliancasinosites.com

"Great teamwork from all of us. We were here until late most evenings discussing strategy, last night and this morning and we had all the bases covered in that respect. Of course it just meant that I had to do the job on track. Coming back from 20 odd seconds wasn't easy but I think it was the right one in the end.

"Today was brilliant work from the team back home," said the Austrian, "it was our Head of Race Strategy, Rosie's, last race before going on maternity leave and I'm so proud.

"It was a bold move," he continued, "and when you see the gap open up to more than 20 seconds, you think there's no way you'll catch up. We saw Max's tyres suffered more than ours, and we were able to stay close. The planner actually showed we'd catch Max with one lap to go but we got there with four!"