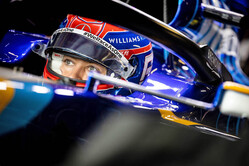 Though he doesn't name a prospective employer, George Russell admits he is seeking a multi-year deal from 2022.

In the third and final year of his current contract with Williams, it is unlikely that - barring a turnaround of McLaren proportions - George Russell will wish to remain with the Grove outfit.

Indeed, widely thought to be a shoo-in for a seat at Mercedes, on a day McLaren announces a new multi-year deal for Lando Norris, Russell admits that he is looking for a similar arrangement.

"I definitely think in the position I am currently, being a free agent as such, going into next year is a good position to be in," he told reporters in Monaco, "but I think stability and longevity is important.

"I think it's so clear with people moving around recently how difficult it is to jump in and adapt to a new team," he added, a clear reference to the likes of Daniel Ricciardo, Sebastian Vettel and Sergio Perez as they struggle to fully fit into their new teams.

"Wherever I find myself next year let's say, I'd like it to be for a couple of years," he admitted, "as it's so important to have that consistency to be able to grow and progress."

Looking ahead to a weekend that sees his team celebrate its 750th Grand Prix, Russell said: "Our Saturday performances have been very strong and obviously here, more so than ever, qualifying is the most important.

"On a track like this, it can be the difference between P15 and P9," added the 2018 F2 champion whose best qualifying this year was 11th in Portugal.