Alonso will require further surgery on his jaw 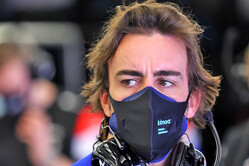 Fernando Alonso has revealed that he will require surgery on his upper jaw to remove two titanium plates that were fitted following his cycling accident last month.

"I feel fine," the Alpine driver told reporters during today's press conference in Bahrain when asked about his recovery. "Obviously one thing is the professional side and driving side, which I'm 100%.

"On the personal I will have to remove two titanium plates which I have in the upper jaw which will be removed at the end of the season," he added. "So still some things going on at the end of the championship but it will not affect my professional life."

"I'm happy to be here, back in the paddock and back in the sport first," he continued. "After the accident I had like ten days to relax at home and after the surgery I had to relax a little bit. After nine, ten days I went back to a very normal routine on fitness, preparation.

"I missed the team launch because the restrictions at that time were quite tough between Switzerland and UK, but I was feeling fine. Ready to go tomorrow in the car.

"I don't expect any issues, honestly," he insisted. "I've been training for now three weeks or two weeks, absolutely normal.

"I've been in the simulator as well - Monday and Tuesday - so the preparations were not affected too much.

"I missed only a couple of marketing days and filming days, which I was happy about in a way!" he grinned. "Then I covered everything yesterday afternoon, I had a very intense day of marketing activities."

Returning to the grid after two year, when asked how hard he expects the midfield battle to be, he replied: "I don't fear any particular challenge. How the midfield is right now is very competitive, so it's something that we are aware of, that we need to maximise and make perfection every weekend if we want to score good points.

"Another challenge, not only for me but everybody in the team and in the paddock, will be the 23 races," he admitted. "We have to be aware of that number and try to save energy when you can during the year, even in the month of June, August, September, even if you feel fresh the more you save, the better you will be in November, December.

"There are a couple of things after being a few years out I will have to relearn a little bit and get used to but in terms of driving again or in terms of approaching the weekend working with the team, it should be quite smooth. I was not two years at home, I was racing every weekend basically, so it should be fine."