Alpine pair to have equal status 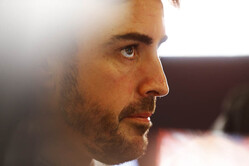 Alpine CEO, Laurent Rossi insists that there will be no number one at the team, with Fernando Alonso and Esteban Ocon given equal status.

There is no doubt that ahead of a season which promises some epic battles – admittedly, mainly in the midfield - the pairing of Fernando Alonso and Esteban Ocon is already causing some to salivate in anticipation.

While the Spaniard is known for his disruptive nature and mind games, his French teammate is no pushover, as Sergio Perez will attest.

The partnership is given added spice with the news that there will be no number one this season, with both given equal status.

"The drivers have to be as fast as possible and will clearly challenge each other," said Alpine CEO, Laurent Rossi at the launch of the team's maiden contender this week.

"That's like healthy competition and that's about it," he added. "There's no instruction and no number one driver.

"(A number one and number two contract) doesn't exist," he insisted. "I don't think it exists in many teams to be honest, at least not in ours."

"I have always had a great relationship with Fernando," said Ocon, whose robust, no-nonsense attitude towards teammate Perez when they were partners at Force India resulted in a number of hair-raising moments, "even when we were racing back together in '17 and '18.

"I always had so much respect for what Fernando has done over the years," he added, "and racing with him has always been very close, but very fun and very enjoyable.

"I'm definitely looking forward to teaming up with him properly in an event. So far it's been a great collaboration and I expect it to be the same for the rest of the year."

While the Frenchman gave Perez a run for his money, he definitely came out second best against Daniel Ricciardo last season.

Asked if he believes Alonso might pose an even greater threat than the Australian, Ocon said: "We will see...

"Fernando is a two-time world champion," he continued. "It will be the first time that I work alongside a world champion so that's very interesting.

"I expect Fernando to be ready. He had a lot of testing last year and with his experience and all what he's done over the years, I think straight away from the first race he will be on it. So yeah, I expect him to be a tough opponent for sure."