Ricciardo: Everything I've seen excites me about where McLaren is heading 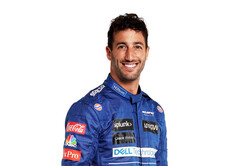 Revealing that he has a three-year deal with McLaren, Daniel Ricciardo believes the Woking team is his best chance yet of securing the title.

"I feel like McLaren have done the right things, particularly the last few years, to set themselves up for these rule changes coming in '22," said the Australian, who secured the seat alongside Lando Norris before the 2020 season had even begun, as part of the reshuffle following Ferrari's decision to drop Sebastian Vettel.

"I think that that next era of F1 has the ability to certainly turn the field around a little bit," he continued. "Everything I've seen, and everything I've kind of known up until now excites me about where McLaren's heading.

"I like Zak, and Andreas, I think, is a massive asset for the team. Andreas is really helping steer the ship in the right direction, James (Key) as well.

"I think they're doing what it takes to now be a real contender in the championship," he insists. "I feel like I'm coming here with a bunch of momentum behind the team. I think as well, not only results, but there's really good stability in the team, the infrastructure…

"When I talked to McLaren a couple of years ago, in 2018, I don't think Andreas was there yet, James Key wasn't, so there were still quite a few moving parts.

"Ultimately, the results weren't quite there on track yet, but they were still trying to figure out their own structure and trying to establish that now.

"I'm basically just fitting into the puzzle as opposed to trying to put it all together. I'm certainly feeling good about it, hanging out to try the car, but it all feels pretty right at the moment."

"Being integrated, not only in the driving side, but into all of it," he explained. "Into the engineering, into the strategy.

"I've already had so many meetings here at the MTC with not only my engineer, but really the whole racing department.

"So it's kind of like, feeling like you're sitting in the room with a voice and with enough knowledge that what you say will be taken onboard. I think that whole integration into all areas of the race team, that's probably got a lot more power than just being the driver, and only the driver. So that feeling, feeling like you can sit in every room and have a presence, that's probably the most important, but also the most difficult thing to get going.

"I certainly have the ambition to be on the podium again, and for my first time with McLaren," said the Australian. "I think because the team achieved this last year, in my head I say ‘OK, we can achieve it again this year'.

"It won't come like that," he admitted, "but I think if we continue and if I put the work in, for sure there's a good opportunity."

The move sees the Australian get his hands on the all-conquering Mercedes power unit for the first time.

"I drove with a Renault in the back of my race car since this hybrid era, so I'm looking forward to experiencing something new again," he said. "I think until I get on track it's hard to really know, but obviously they've had a lot of success. I am anticipating something capable."

Asked about his new teammate, Ricciardo said: "For sure there's some things I can learn from him, particularly in the team itself, and kind of the integration into the McLaren family.

"I think every time you have a new team-mate it's a real opportunity to learn something new, whether it's work ethic, driving technique, or both.

"I'm always pretty open minded. I know every driver has confidence in themselves and their ability, I am very confident as an individual but I'm also open-minded, and if there is something I can take from Lando and use it to better myself then obviously I'm looking to learn as much as I can."