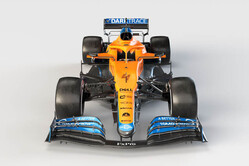 McLaren has revealed its 2021 contender, the MCL35M, which sees the 8 time champion constructor once again join forces with Mercedes.

Lando Norris and Daniel Ricciardo effectively got the 2021 season underway with live show at the McLaren Technology Centre as the Woking team unveiled its new driver line-up and car to a live global audience.

21-year-old Norris enters his third season with McLaren, following a breakout season in 2020 that saw the Briton achieve his first F1 podium. This year he is joined by seven-time race winner Daniel Ricciardo.

2020 saw the team climb to third in the constructors' championship amid tough competition from a packed midfield, and the logistical challenges of an adapted season due to the pandemic.

The intense rivalry between teams is expected to continue into 2021 as technical regulations remain stable, further compressing the competition between them, and financial regulations come into force to provide a sustainable platform for the future of the sport.

Alongside its new driver line-up, the team shared the first glimpse of the MCL35M, an evolution of the 2020 contender, the MCL35, which benefits from aerodynamic and chassis developments by the team throughout the winter.

Alongside these developments comes the introduction of a new power unit, supplied by Mercedes-AMG. The Mercedes-AMG M12 E Performance was integrated into the design of the MCL35M by McLaren with the support of Mercedes High Performance Powertrains and represents one of several key changes to the car as part of its evolution into the MCL35M.

The popular livery has undergone a subtle progression from the 2020 design, maintaining the iconic papaya orange and blue, the colours first carried by the team in the 1960s with team founder, Bruce McLaren, at the wheel.

The team heads into its 54th year of F1 competition with a strong portfolio of more than 40 committed partners and recent investment from MSP Sports Capital and UBS O'Connor, announced at the end of 2020, building on its performance off-track, alongside its on-track progress.

Norris and Ricciardo will first drive the MCL35M at Silverstone from tomorrow (Tuesday) as part the team's pre-season filming days.

The team makes its first official outing at the Bahrain International Circuit on March 12 at pre-season testing. The Woking team will return to Sakhir for the season-opener, and the team's first home race, at the Bahrain Grand Prix on 28 March.

"We're thrilled to launch our 2021 team with Lando and Daniel, as we prepare to get the Formula 1 season started," said Zak Brown. "We've got an incredibly exciting driver line-up this year, both are formidable racers on-track and great characters off-track. Lando is a naturally fast and intelligent racer on an exciting trajectory, while Daniel is a multiple grand prix winner with a sharp racer's edge and exceptional talent.

"After a challenging but rewarding 2020, we have firmly hit the reset button for this season as we continue on our path towards the front of the grid. This will be an even tougher season but we're ready to meet the challenge. I want to pay tribute to Formula 1 and the FIA and our fellow teams in continuing to work hard for the benefit of our sport as we strive to bring exciting racing to fans around the world.

"We head into this season with an incredible group of committed and valuable partners at our side, who are such a vital part of our team. 2020 represented a significant challenge, not just for McLaren Racing but also many of our partners, so to have maintained their support is a testament to the quality of our partners and the relationships we have formed on our journey together.

"We've really missed having our fantastic fans with us at track, and we can't wait to have them join us again when safe to do so. As always, we go to every grand prix weekend with the ambition of putting on a great show and achieving the best possible result for our incredible fan-base.

"I'm proud of our team and the progress we've made together so far. We've still got a long way to go, but we've got a great spirit in the team and we're becoming stronger competitors as we continue on our journey."