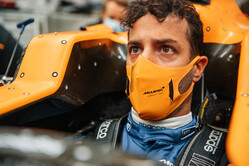 Ahead of the new season, McLaren continues to build anticipation as the Woking outfit reveals Daniel Ricciardo sitting in the cockpit of the team's 2021 contender.

In all honesty, as far as the head shots go, if it wasn't for the papaya livery - and matching face mask - the Australian could have been sitting in any old car, though the Woking team insists he was having his seat fitting for the MCL35M.

Other than trying out the cockpit of his new ride, Ricciardo was shown walking the MTC's famous boulevard where, like many before him, he drooled over some of the team's various winners from its long, rich history.

The 7-time race winner appeared particularly interested in the Can-Am and Indy car on show.

While a video showed the popular Australian laughing and joking with some of his new colleagues, including team boss Andreas Seidl, Ricciardo has stressed that his move to Woking is for business and that taking the team forward is his aim.

"I want to reiterate to everyone watching, and every fan of McLaren in particular, it's not going to be a comedy show," the Australian told Sky Sports recently. "I'm going there for business, I'm going there to improve the car.

"My personality won't change," he assured fans, "I do enjoy doing what I do, but I'm certainly not going there to be this meme power couple or whatever it's described as these days."