McLaren - and F1 - will benefit from budget cap, says Brown 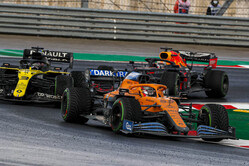 After years of false starts, F1 finally sees the introduction of a budget cap this year.

As he eyed teams fall by the wayside and manufacturers use the sport like a revolving door, Max Mosley did his best to introduce such a cap... but failed.

Ironically however, as the $145m limit is finally introduced, McLaren, one of the original objectors to such a cap, is fully behind the scheme, with Zak Brown insistent that, along with other impending changes including an overhaul of the way in which prize monies are decided, it will benefit the Woking outfit and the sport in general.

"The new era of F1 plays right into our sweet spot," the American tells Motorsport.com. "With the budget cap, we've had to reduce our spend a bit, but not to the same level as the other three that were significantly outspending us.+

"The governance is better," he adds, "it gives more power to Formula 1 and the FIA as opposed to the teams, because the teams with all the political power, with the previous governance, were able to better keep things shaped around their agenda. I think that gets neutralised.

"The revenue distribution didn't make a big difference to us," he admits, "but it's going to make the sport more competitive. We now have the ability to now be a big team, because we're running at the budget cap, it's also brought more competition from behind. We now have a better shot to catch the guys in front of us, but we need to pay attention."

As was the intention, especially with the rules overhaul coming next season, Brown believes the playing field will be levelled out - particularly in the midfield, while also allowing those teams more chance of springing some surprises at the expense of the 'big three' (two?).

"Effectively, you've got six or seven teams that are all going to run at the budget cap," he says. "AlphaTauri is very well funded. They kind of keep their head down, but I don't think that team is short of resources. Clearly Lawrence Stroll is investing a lot of money in his team. You then have Renault, who I think is at our level. You've got seven teams that I think are all playing with the same size bat, if you like, and I think that's great.

"Not only do I think we have a better chance of getting first or second in the future, I think it's a seven-car team race. I really don't think you can write anybody off. But again, that's good for the sport.

"I hope what we get to is more of an IndyCar-type championship, where your big teams are still the ones that win the championships at the end of the day, but other teams win races. It would be great if we went back to three or four race wins gets you the championship, not 14," concludes the American, whose team's trophy cabinet attests to the 1988 season when McLaren won every round of the season bar one.