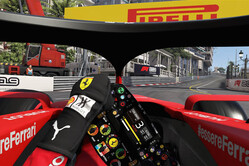 F1 Esports aims to build upon the success of 2020, and is kick-starting the new year with the return of the Virtual Grands Prix, this time for a three-race competition with a charity prize fund up for grabs for the teams.

According to F1, "over 30m people tuned into the Virtual Grand Prix series last year to see F1 stars, sporting icons and music chart toppers represent the ten F1 teams in eight live events that replaced the official calendar, as F1 Esports continued to bring fans competitive action when the real-life racing stopped due to the pandemic".

The Virtual Grands Prix will return on Sunday 31 January for three events on consecutive weekends, where the ten teams will battle it out for a charity prize fund, represented by a combination of F1 drivers past and present, celebrities and F1 Esports Series gamers.

The format has been altered since last year's events, as the pro gamers will now take part in a five-lap Sprint Race to determine the grid order for the Feature Race, where the teams' duos, made up of the participating famous faces, will then compete at 50% race distance to secure points for the overall standings.

The team championship standings will be tracked across the events and will determine how the prize fund is then distributed to their nominated charities.

Whilst the return of the Virtual Grand Prix Series will be F1 Esports' flagship event for the start of 2021, it is just one of many virtual competitions taking part.

The F1 Esports Series China Championship will crown its second winner in next week's Grand Final in Shanghai after an entertaining campaign, while the inaugural F1 Mobile Racing Esports champion was recognised earlier this month, as Matteo Pagliani came out on top from over 60,000 elite qualifiers. The Challenger Series also continues for a further eight rounds across PS4, Xbox and PC platforms until April, before the F1 Esports Series Pro Championship returns in the autumn.

Alfa Romeo's Jarno Opmeer secured his first F1 Esports title in December's Grand Final event, as both the drivers' championship and teams' championship, won by Red Bull for the second successive year, came down to the final race of the campaign.

The Grand Final achieved 2.7m digital views, setting a new record for a Pro Series event, previously attained in Event 1 of the 2020 season.

Following the popularity of the previous Pro Series' and last year's Virtual Grands Prix, more people than ever before attempted to qualify for the 2020 season, as participation increased 117% to 237k.

"It is fantastic to see the F1 Esports Series 2020 break viewing and engagement records after a brilliant championship where we saw competitive racing and high drama at every event," said Julian Tan, Head of Digital Business Initiatives & Esports at Formula 1. "We had to adapt in the way we operated for this year's Pro Series due to the pandemic, but we're thrilled to see that it didn't affect viewers enjoyment, or consumption, of the action.

"2020 was a tough year for everyone, but we look forward to bringing fans more excitement in 2021, starting with the return of the Virtual Grands Prix as we welcome back some of the faces that made it such a special experience last year, and invite some new ones too, all in the name of charity. Watch this space!"