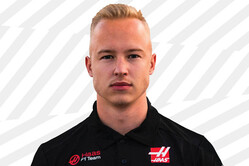 In the brief video clip, the Russian, who is a passenger in the front seat of a car, is seen reaching into the back where he appears to touch a woman inappropriately, despite her obvious discomfort.

The post has caused outrage on social media as a result, to the extent that the hashtag #wesaynotomazepin is trending.

"Haas F1 Team does not condone the behaviour of Nikita Mazepin in the video recently posted on his social media," said the American team this morning. "Additionally, the very fact that the video was posted on social media is also abhorrent to Haas F1 Team.

"The matter is being dealt with internally and no further comment shall be made at this time."

In reaction to the backlash, and Haas' statement, Mazepin issued an apology via Twitter.

"I am sorry for the offence I have rightly caused and to the embarrassment I Have brought to Haas F1 Team," he wrote.

"I have to hold myself to a higher standard as a Formula 1 driver and I acknowledge I have let myself and many people down. I promise I will learn from this."

The incident comes days after the Russian was hit with two penalties for his actions on-track antics during the final round of the F2 championship, and which left Haas team boss, Guenther Steiner admitted that he would effectively have his work cut out controlling the Russian.

However, at a time Mazepin is already being accused of racism and homophobia on social media, Haas faces some difficult decisions, especially if - as we have heard from a reliable source - the team has been sold to the Russian's father.

Indeed, as it pushes its own #WeRaceAsOne message, F1 bosses will also be watching the situation with concern.