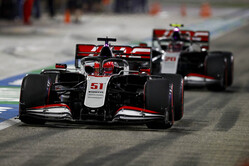 Both drivers unfortunately saw their qualifying session end after the opening knockout round, Q1 - held under the lights around the 3.543-kilometer (2.201-mile), 11-turn 'Outer Track' layout. With three new sets of Pirelli P Zero Red softs at their disposal, Magnussen and Fittipaldi were out early banking the first of their three timed runs. Magnussen set a 0:55.464 with Fittipaldi on a 0:55.558.

With Fittipaldi already set to start last on the grid due to a 15-place penalty for Power Unit element changes - the team opted to use the Brazilian to assist Magnussen with a tow on the next two runs. Lap times dropped on their second runs and once again on their third timed charge. Magnussen set a 0:54.705 to place 16th at the checkered, narrowly missing out on Q2, with Fittipaldi logging a 0:55.426 for 20th.

Pietro Fittipaldi: "It was my first qualifying session in Formula 1, obviously I was really looking forward to it. I've always loved qualifying, that's when the car is at its best with new tires - you can really push. Knowing that I'd have the grid penalty for tomorrow the team thought it was the best strategy to help Kevin (Magnussen) on the second and third outings by giving him a tow on the main straight, so we did that. Obviously I had to put my lap together after that, so it was a bit of a struggle - but in the end it was the best thing for the team. I've experienced my first qualifying and now I'm focused on the race."

Kevin Magnussen: "We were close to getting into Q2, I think we were just behind a Red Bull - that's the first time this year we've qualified right behind one of those cars. Obviously, they made it further up, but we gave it our best and P16 is actually the best we've been for quite a few races I think. We'll see what we can do from there tomorrow. There's a good chance it could be a crazy race with a lot of blue flags to manage. If overtaking proves to be easy, lots of things could happen. We'll be ready as always. It'll be key to stay out of trouble and not get penalties for blue flags - there's going to be so many as the lap is so short. Some people might also be on a three-stop race, that could make it an exciting race."

Guenther Steiner: "It was a solid FP3 to start the day. Then in qualifying I think we really got the best out of it that we could by executing teamwork. Pietro (Fittipaldi) gave up his fastest laps to try to help Kevin (Magnussen) get into Q2 - which he just missed out on slightly. We tried something as a team and Pietro actually did a good job in trying to help Kevin. We knew he had the 15-place grid penalty anyway, so we decided to go for it knowing he would start the race last anyway. Big thanks to Pietro for his work today and together with Kevin we look ahead to tomorrow's race and seeing if any opportunities await."