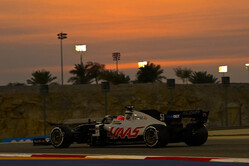 The 16th round of the 2020 FIA Formula 1 World Championship began with practice on Friday at Bahrain International Circuit as teams prepared for Sunday's Sakhir Grand Prix - notable with Brazil's Pietro Fittipaldi making his Formula 1 weekend debut with Haas F1 Team subbing for the injured Romain Grosjean.

Two 90-minute sessions - FP1 and FP2 - were run under the floodlights on the short 3.543-kilometer (2.201-mile), 11-turn 'Outer Track' - another first in Formula 1 as the field sampled one of the alternative layouts available at Bahrain International Circuit for the second-leg of the Bahrain double-header.

FP1 saw Fittipaldi one of the first cars on track for his installation run on the Pirelli P Zero White hard tires. He followed that up with a 17 lap wake up run on the same set. A switch onto the Red soft tires followed but lasted only a handful of laps - a lock-up and subsequent flat spot on his front-left forcing Fittipaldi's opening session to end prematurely with no further tire sets permitted. His best time of 0:57.077, set on the soft rubber, placed him 19th overall. Magnussen ran the same tire plan, starting on the hard compound before swapping onto softs. Magnussen recorded 37 laps in the session with a fastest time of 0:56.130 on his low-fuel run placing the Dane 17th.

Fittipaldi and Magnussen ran identical plans again in FP2, staring on mediums before switching to softs - with the session concluding for both drivers with a long-run on high-fuel utilizing both compounds. Magnussen finished the session 14th overall at the checkered - his best lap a 0.55.738 clocked on the soft tire. Fittipaldi similarly delivered his fast lap on the soft rubber, the Brazilian clocking a 0.56.110 for 18th place on the timesheets.

Pietro Fittipaldi: "It's been both fantastic and exciting today. It's been a year since I've driven a Formula 1 car, eight months since I've driven anything on track. I took the day step-by-step, I just kept my focus and kept calm. I was really happy with the day. The team have helped me with everything, the engineers did a great job talking me through things, and the mechanics have done a great job as well. The only set-back was in FP1, we had a lock-up that damaged my tires, I couldn't do any further running. I kept my cool and we just went into FP2 and got through our run plan. Tomorrow I'll make another step, slowly turn up the volume, and push when it comes to qualifying then the race."

Kevin Magnussen: "Well, it's certainly a very short track with a lot of traffic - it's very narrow as well, very bumpy. It's certainly a challenge. Unfortunately, we're not fast enough, either on the normal track or this new one. We've also got to work on the balance of the car, it's not just the straights where we're slow - we have to work on the corners. We've got to try and manage all that. I think Pietro (Fittipaldi) has done really well today. It's a big ask to be thrown into a car just a couple of days before a race weekend with no testing. I think he's gotten up to speed really well. Hopefully he's enjoying it."

Guenther Steiner: "The combination of the two sessions were very good. In FP1 Pietro (Fittipaldi) lost a few laps - he flat-spotted the tires, so he couldn't go out anymore. For sure though, FP2 was good because the most important thing for Pietro was getting laps in. I thought he did very well in FP2. I hope he's not too worn out now because of the physical demands. Kevin (Magnussen) did a good job today as well, he was solid while getting used to the new track layout. Now we get ready for tomorrow."