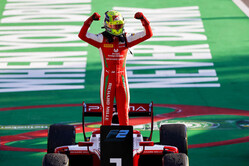 Mick Schumacher has won the 2020 Formula 2 championship despite finishing a distant 18th in the final race.

Carlin's Jehan Daruvala won the race, coming out on top of a race-long battle with Dan Ticktum, to win by 2.9s, while the DAMS driver ended up in third after a late overtake from feature race winner Yuki Tsunoda, who secured a Carlin one-two.

For a moment, it looked as if the title was slipping out of Schumacher's fingers, after an early lock-up damaged his tyres and forced him into an unwanted pitstop.

The German ended up in 18th, but Callum Ilott was unable to secure enough points to snatch the crown, dropping down from third and ending thus his F2 career with a 10th place finish.

While Schumacher was quick off the line, diving down the middle of Ticktum and Daruvala in an attempt to steal the lead, the pole-sitter managed to cling on going into the opening corner, but Daruvala fell back to third.

However, Schumacher's race, and title ambitions, nearly came crashing down on the second corner when the German locked up heavily and only just managed to retain control of his PREMA, narrowly evading the rear wing of Ticktum and keeping it on the road.

This allowed Daruvala to briefly get back ahead, though the German composed himself and clawed the place back.

Ilott had retained fourth off the line but realistically needed a win to stand a chance of snatching the title from Schumacher, saying pre-race that he had "nothing to lose".

Forced to make a late stop for fresh tyres, Schumacher rejoined the race in 20th, going on to clinch the title with a tally of 215 points, 14 ahead of Ilott on 201.

Tsunoda finished just one point behind Ilott in third, ahead of Shwarztman and Nikita Mazepin.

Earlier this week Schumacher was announced as teammate to Mazepin at Haas next season.

"Today's race was pretty dramatic, because I flat-spotted my tyres on the opening lap and after that, I had to try and live with the situation.

"But on lap 19 I lost a few places and the team rightly chose to pit me to go onto the softs. Unfortunately, that compound was not particularly quick today and so I couldn't make up many places.

"I was kept informed on the radio about what was going on at the front and I knew other drivers were also struggling with their tyres.

"I want to thank the Prema team and the Ferrari Driver Academy for what has been an unforgettable season. We did not get the most race wins, but none of the others performed as consistently as us in bringing home points. I think that was the key factor that brought me the championship title."