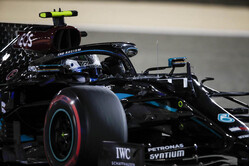 Not for the first time, we head into qualifying with a number of unanswered questions, for FP3 in many ways simply muddied the waters.

While Valtteri Bottas recovered from his Friday nightmare, it was teammate George Russell who appeared at sixes and sevens, as he struggled to put a perfect flying lap together.

But this is where is gets really interesting for drivers who appeared strong yesterday seemed to struggle today, and others who struggled yesterday, well... you get the picture.

Consequently it is difficult to gauge a true pecking order, a situation not helped by the inevitable issues we are going to face over the coming hour - especially Q1 - in terms of traffic.

Some have used the word "carnage", which seems somewhat inappropriate but we certainly expect a few shocks, which in turn should add to the fun and games tomorrow.

Over the break, Ferrari has changed the power unit in Vettel's car as a precautionary measure, the Italian team not having the best of weekends thus far.

The lights go green and Raikkonen, Magnussen, Latifi and Fittipaldi lead the way.

Sainz and Gasly are next out, the Spaniard posting 55.334, despite a big lock-up, as the Ferraris head down the pitlane. Interestingly, the McLaren driver is on hards while the rest are on softs.

Kvyat goes fifth, ahead of Leclerc, Vettel, Ocon and Gasly.

Albon goes third with a 54.664, but is immediately demoted when his teammate goes quickest with a 54.037.

Norris has had his time deleted and has therefore yet to post a time. The Briton subsequently claims ninth with a 54.884.

It really is fast and furious as the drivers continue to go round and round the two-mile track.

Some of those times were set on hards others on mediums, but for the final assault softs appear to be the order of the day.

Raikkonen improves to 13th with a 54.963, as the Mercedes pair head out on softs.

Bottas, currently 6th, goes quickest in S1 as Russell posts a PB. The Finn maintains his pace in S2 only for Russell to go quicker. Bottas crosses the line at 53.904 to go top, while Russell posts 54.160 to go third.

15th, Albon breathes a sigh of relief when Raikkonen fails to improve and thereby demote him.

No sooner have the lights gone green for Q2 than Sainz roars out of the pitlane. He is followed by the Ferrari pair who are both on mediums. The Mercedes pair are also on the yellow-banded rubber.

Russell has to take avoiding action when he finds Sainz looking large in his mirrors.

Gasly goes top with a 54.130, the Frenchman fastest in the first and final sectors.

However, Gasly has his time deleted as countryman Ocon goes fifth with a 54.247.

Russell reports that he is "still not happy with Turn 1".

Leclerc improves to sixth, while Vettel pits, the German 13th with just 4:40 remaining.

Stroll fears damage to his car after making contact with the kerbs at Turn 8.

With 2:00 remaining the final assault gets underway. All bar Sainz head out.

At which point the Spaniard opts to join his colleagues on track.

Norris leads the field however, after catching up with those at the back he aborts his lap.

Ocon can only manage 8th, while Verstappen goes quickest (53.647) and Kvyat 7th.

Leclerc goes sixth, while Vettel fails to improve and Albon appears to have a problem and fails to make the cut.